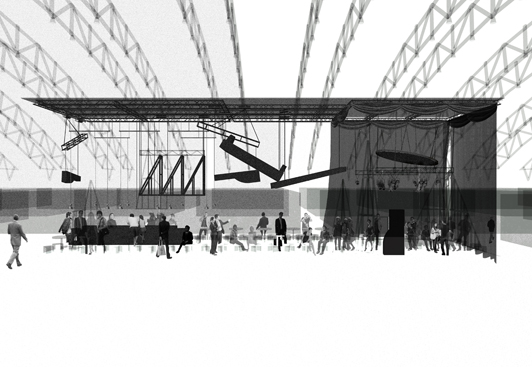 The central bar for this year’s 100% Design at Earls Court, London has been commissioned from architectural practice Post Works (Matthew Butcher and Mellissa Appleton). For the design Post Works have engineered a bar area that can reconfigure itself daily and hourly. Through a system of moving, suspended props or “architectural characters”, falling curtains and changeable lighting, the central bar can evolve into a multifunctional space. Produced in collaboration with theatre consultants Charcoal Blue, Arup Engineers and carpenter David Leviatin. Over the last four years Post Works have produced a number of projects with artists for arts venues including Sadler’s Wells, I.C.A., Hayward Gallery and Swiss Cottage Library. Their work is being shown at the Architecture Foundation, London 30 September to 29 October, where recycled elements of the bar will provide a back drop for a number of artists and designers to display their work. Expect contributions from rising star Edwin Burdis who is one of Post-Works regular collaborators. Following this Post-Works are collaborating with Daria Martin to make her new piece for her exhibition at the MK Gallery in spring 2012. Also for 2012 will be2EmmaToc: Writtle Calling a project marking the 90th anniversary of the first independent radio station in the UK. The elevated broadcasting shed and mast as proposed is suitably Futurist and a vision of things to come. Stay tuned. 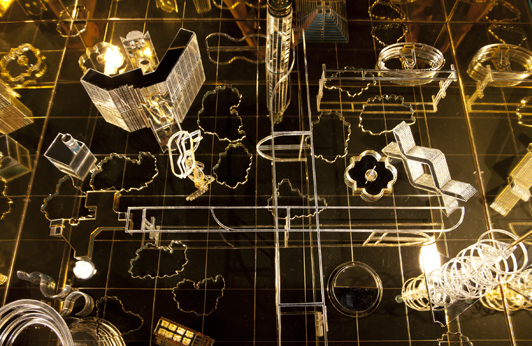 Stage City is an alternative reading of the city of London that explores the performative potential and secret life of London’s buildings and urban landscape. Fragments of buildings and city spaces are anthropomorphised and edited to form an assemblage of characters, props and sets. The mirrored surface of the model creates an endless grid of reflections and folds in the space of the gallery and the viewer. The model has been shown at the Gopher Hole in London, the Prague Quadrennial 2011, and the RA summer exhibition. It will also be exhibited at the V&A, London, in 2012 in an exhibition featuring a verity of architects, artists and designers  focusing on the relationship between design and performance. 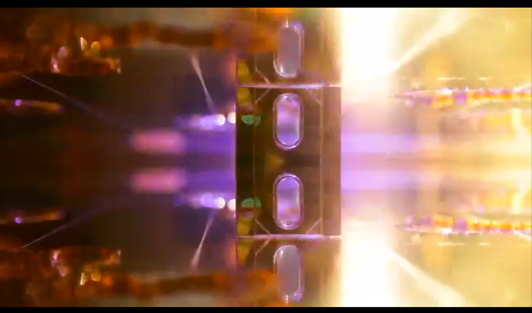 No Stop, Statue, Machine was the first major collaboration between Post Works – Melissa Appleton and Matthew Butcher – and artist Edwin Burdis. Recently premiered at the Institute of Contemporary Art in London, the film and sound work present a notional urban landscape where fragments of a familiar city are anthropomorphized and abstracted to form an assemblage of characters, props and sets.  Exploring themes of architecture, the city and performance, No Stop, Statue, Machine presents a Ballardian world where buildings weep at the change in the weather, infrastructures conduct people’s thoughts instead of facilitating movement, and staircases become machines for endless exercise.