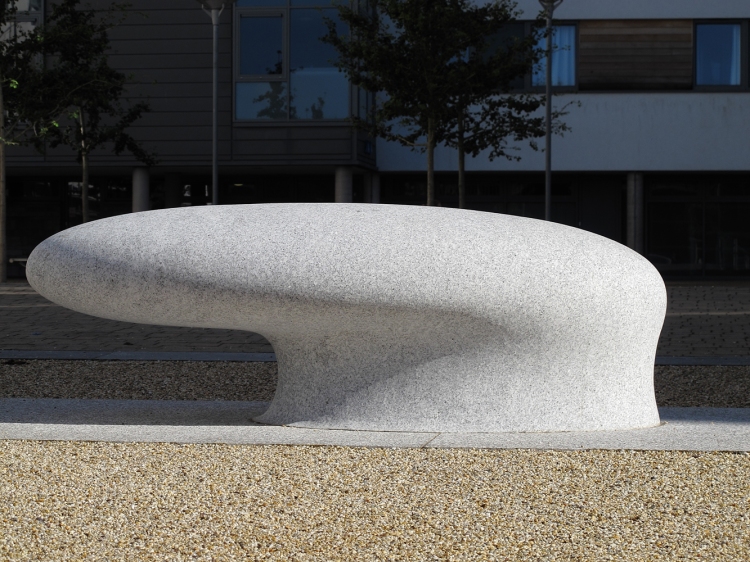 Ian McChesney’s commissioned artwork for the University of Plymouth, entitled, Arrival and Departure, comprises two opposing bollard shaped forms, suggesting monuments to journeys. Each form weighs two tonnes and measures 1.7m long x 0.9m wide x 0.6m high. They were hand carved from solid blocks of granite from the De Lank Quarry in Bodmin Moor, near Plymouth. The sculptures are redolent of quayside mooring bollards to reflect the site’s maritime past. Plymouth’s nautical heritage includes Sir Francis Drake playing bowls before engaging the Spanish Armada; the point of emigration for the Pilgrim Fathers sailing on the Mayflower for America; Darwin sailed on HMS Beagle in 1831 gathering information on natural history and for his book The Voyage of the Beagle; and it was the birthplace of Robert Falcon Scott the polar explorer.

The commissions for the University at Plymouth form part of the University’s 150th year celebrations and complete James Square, a new mixed used development comprising a residential building, refectory and the new Rolle Building by David Morley Architects. To mark the unveiling, students from the University and local schools performed Moving On, a contemporary dance piece performed around and upon the piece choreographed by Gemma Kempthorne inspired by Plymouth’s maritime history and journeys. The commission was organised by Peninsula Arts, the arts and culture public programming organisation for Plymouth University.

Ian McChesney is an architect who also produces public sculpture, including rotating wind shelters for Blackpool’s promenade; Blaze a large scale piece for the A66 in Middlesbrough; Out of the Strong within the Stirling Prize nominated ‘Angel Building’ in London, which was shortlisted for the Marsh Award for Public Sculpture in 2011.