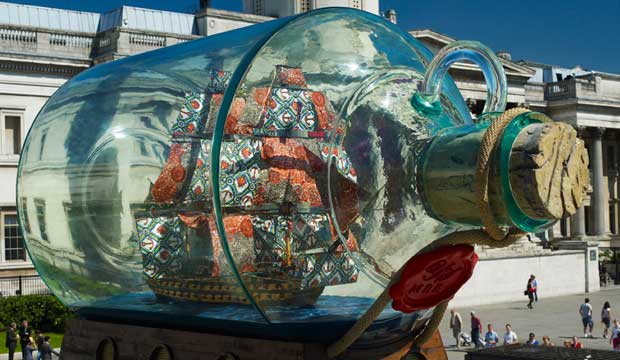 Yinka Shonibare’s Nelson’s Ship in a Bottle, was a temporary contemporary commission placed on the Fourth Plinth in Trafalgar Square from 24 May 2010 to February 2012. A public appeal has been launched to purchase the sculpture for the National Maritime Museum in Greenwich, which has the largest collections of model ships and Nelson artefacts in the world. The Art Fund has launched it’s first campaign to acquire a contemporary sculpture, not including the Fourth Plinth!. The amount needed is £362,500 and the Art Fund has offered initial funding of £50,000 and organized a fundraising and publicity campaign using social media, asking for 70,000 text message donations at £5 each to support the appeal. A South Korean collector was prepared to pay c £1,250,000 but with a government tax concessions for museum acquisitions, the cost for buying and re-siting the work is £650,000. The work was commissioned and funded by the Greater London Authority, Arts Council England with sponsorship from Guaranty Trust Bank of Nigeria, but ownership of the work reverted to the artist. The National Maritime Museum’s costs would be move and re-site the sculpture and to fund a long term management and conservation programme for the permanent siting of the sculpture.

Nelson’s Ship in a Bottle is claimed to be the world’s largest ship-in-a-bottle. The replica scale model of Admiral Nelson’s replica of HMS Victory commemorates the Battle of Trafalgar in 1805. It reflects on the historical symbolism of British Empire and the architectural monuements of Trafalgar Square, Nelson’s Column and Admiralty Arch. Nelson’s Ship in a Bottle is built from traditional shipwright’s materials – oak, hardwood, brass, twine and canvas, and 80 cannon. The 37 sails (31 set and 6 furled) are hand printed on canvas with African textile designs, and with flag signals from the Battle of Trafalgar showing the message “engage the enemy closely”.

Yinka Shonibare was born in London to Nigerian parents, and mainly brought up and educated in Lagos and the work has many post-colonial allusions

‘The ship’s 37 large sails are made of richly patterned textiles commonly associated with African dress and symbolic of African identity and independence. The history of the fabric reveals that they were inspired by Indonesian batik design, mass produced by the Dutch and sold to the colonies in West Africa. Tying together historical and global threads, the work considers the legacy of British colonialism and its expansion in trade and Empire, made possible through the freedom of the seas that Nelson’s Victory provided.’

Shonibare described Nelson’s Ship in a Bottle as a piece of art with elements of magic and wonder, and as a metaphor for cultural diversity that reflects the story of multiculturalism in London:

“For me its a celebration of London’s immense ethnic wealth, giving expression to and honouring the many cultures and ethnicities that are still breathing precious wind into the sails of the United Kingdom. A ship in a bottle is an object of wonder. Adults and children are intrigued by its mystery. How can such towering masts and billowing sails fit inside such a commonplace object? With Nelson’s Ship in a Bottle I want to take this childhood sense of wonder and amplify it to match the monumental scale of Trafalgar Square.” Yinka Shonibare 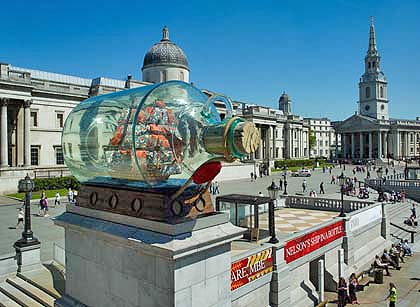