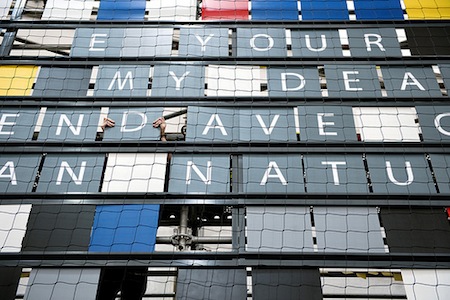 Bik Van der Pol‘s work is akin to a ‘live’ literary cricket scoreboard animated by assistants who constantly change the text to spell out a number of abstract idioms, quotes and maxims, providing a narrative for visitors to the fair. The project arose through an interest in architect Cedric Price and his interests in temporality and visibility. 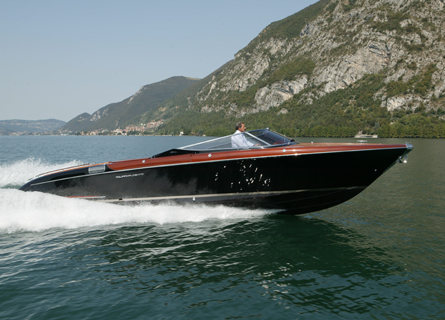 Christian Jankowski’s project, in conjunction with a luxury yacht company, employs a boat dealer to sell a full-size motor yacht from a conventional gallery stand. This luxury product, entitled Allure, is available to buy not only as a boat, but also as a Christian Jankowski artwork. 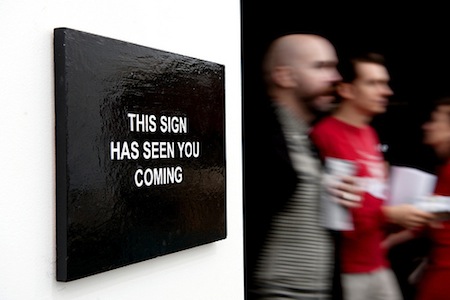 Laure Prouvost’s idiosyncratic hand- painted signs play with issues of language, translation and authority, or with ideas around space and disorientation. Made as a response to the architecture of the space and the movement of its audience they purport to instil some order into the situation, but often offer little clarity. The signs are often funny, sometimes sweet, occasionally straightforward and instructional.

The other projects develop through the life of the fair as performance/installations. Pierre Huyghe’s live aquarium ecosystem follows a quiet intensive psychological narrative enacted by seawater creatures as a contrast to the atmosphere of the fair. Oliver Laric will be creating stock video footage to be published for free use as public domain material. This portfolio of film footage will be shot in and around the fair, using a number of specialist high-resolution cameras with specific slow motion and digital cinematographic features. Cara Tolmie is making a new performance that will construct a postulated fictional space within the space of the fair, purely through methods of performance – song, movement and spoken word. LuckyPDF are inviting over 50 artists to show and produce new work for a series of live daily broadcasts made at Frieze Art Fair. Film performance, news and chat will be introduced by special guest presenters. Visitors can join them in the project space studio for open rehearsals and live recordings or watch throughout the fair on special screens and wireless access points. Viewers at home can watch via the Frieze Foundation website. Peles Empire is a collaboration by Katharina Stoever and Barbara Wolff. Their work takes as its source material Peles, a Romanian castle sited at the foot of the Carpathian Mountains. Stoever and Wolff have reproduced nine different rooms of the castle, recreating them with simple photocopied montages. Built between 1873 and 1913, the castle’s architecture is a clash of historical styles ranging from Renaissance to Gothic Revival, Art Deco to Rococo. At Frieze they will install a bar acting as a Gesamtkunstwerk, in which everything – from the reproduced room and its decorative furnishings, to the serving of guests and taking part in the fair – is part of the work.