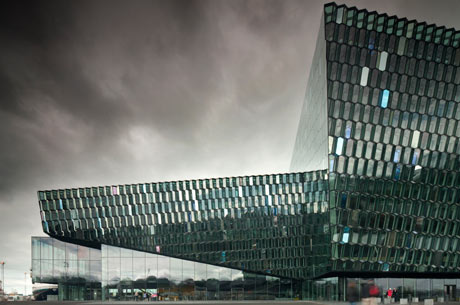 Olafur Elisson and Henning Larsen Architects have collaborated to create the Harpa Reyjkavik Concert Hall and Conference Centre, Iceland opened on August 20th 2011. A glass façade by Eliason creates a glass box with an internal core of dark concrete forming the inner walls, balconies and stairs of the foyer. The 28,000 sq.m interior includes four halls for music and conferences designed by Henning Larsen and Batteriid Architects. 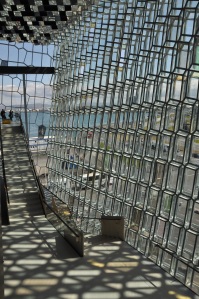 Elíasson’s contribution was to introduce light, colour and natural phenomena to engage and interact with the building through movement and a sensory perception of the environment. Artist and architects worked together to create a façade of crystalline tilted and faceted polygonal glass frames with coloured and mirrored panels inserted at irregular intervals. The subtle kaleidoscope of colours – resembling the shimmering colours of fish scales – changes throughout the day as the waterfront façade reflects and responds to water and light scales of the low northern latitudes. From the inside, the hexagons create a faceted and mirrored structure that continues over the ceiling of the foyer. During the day the natural lighting throws a grid of shadows and light onto the interiors – changing hues as the seasons change. In the evening, the building is lit from within via a system of LED lights that reflect in the waters of the harbour. 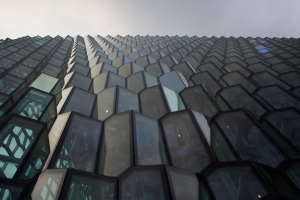 “In Iceland, 30 percent of the day is twilight. One third of people’s lives are lived in this transitional zone. The relationship people in Iceland have to the landscape is like the relationship you have to a close family member. It has to do with the way the light gives the landscape a constantly changing personality. It speaks to you with such finesse.” Olafur  Eliasson

The building has a symbolic and organic element inspired by the volcanic geology of Iceland. The main red hall is named Eldborg (The Fire Castle) after an extinct volcanic crater representing fire. The smaller halls are named after the Northern Lights (air), Calcite crystals (earth), and a cold lagoon (water). 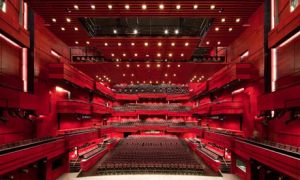 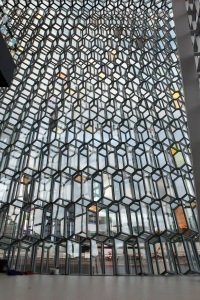 The building is a remnant of the ambitious vanity art project for a national population of 300,000 people. It was commissioned before the banking crisis that stopped the Icelandic economy but the project was refinanced costing in total Euro161m / $150m / £90m. Harpa is now presented as a symbol of Iceland’s economic revival and as the focus for the regeneration of Reykjavik’s East Harbour Project. The building will be the home to the Icelandic Opera and the Iceland Symphony Orchestra.