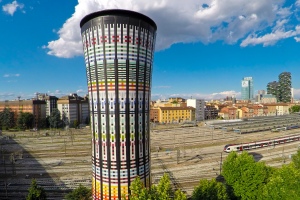 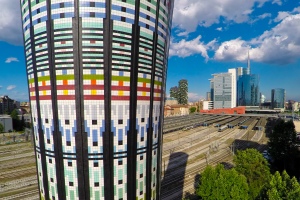 Torre Arcobaleno (Rainbow Tower) in Milan was once an anonymous water reservoir, built in 1964, on the site of the FS Milano Porta Garibaldi railway station. The Tower was first renovated for the football World Cup held in Italy in 1990, metamorphosing a public utility into a recognisable urban beacon. Since then, the Torre Arcobaleno has become a distinctive symbol of Milan’s colour and creativity, for the Piazza Gae Aulenti and the business, fashion and modern architecture of the Garibaldi zone. 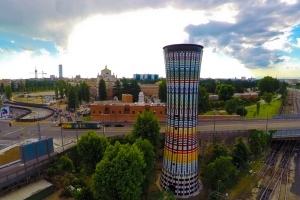 The Torre Arcobaleno forms part of the Wonderline project by Original Designers 6R5 Network, linking initiatives in the world of art and architecture with the theme of colour. Clad with more than 100,000 coloured ceramic tiles – the tower is a colourful ceramic totem that acknowledges the craft origins of the Italian ceramic industry.  The colours of the Torre Arcobaleno “express the desire to inhabit our planet intelligently, creating a harmony between technology, nature, innovation and tradition.” 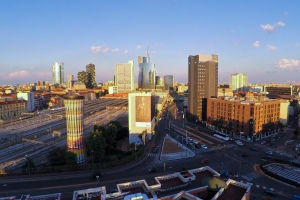 The modernisation work of the Torre Arcobaleno was completed by Bazzea – B Construction Technology, Condor, Fila Solutions, Mapei and Marazzi under the patronage of Milan City Council and in association with the Rete Ferroviaria Italiana and Gruppo FS Italiane railway authorities.

The original renovation in 1990, and the refurbishment in 2015 was designed and managed by Original Designers 6R5 Network, represented by Francesco Roggero, Albino Pozzi, Rita Alfano Roggero and Kiyoto Ishimoto.

The renovation was completed in June 2015 to mark Expo 2015, with the costs met by the project’s partner companies and architects as a gift to Milan.