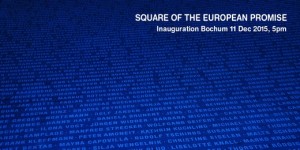 “Just like the stars give their light to the night,
people give their promises to the future.”
(Jochen Gerz)

Der Platz des europäischen Versprechens wird am 11.12.2015 eröffnet / The Square of the European Promise will be inaugurated on 11 December 2015 at 5pm.

An artwork by many and a central site for the European idea – in 2004 the citizens of Bochum in the Ruhr-area of Germany first followed the invitation of internationally renowned artist Jochen Gerz and gave a promise to Europe. Everyone kept their promise to themselves, but the names of those who pledged were inscribed into the ground of a new square – the Square of the European Promise.

As people from the region, Germany and later from all over Europe continued to participate, thousands of names filled the square. Today, with 14.726 names engraved in the 63 giant basalt stone plates on the 3.000 sqm square in the city centre, each representing a different and personal contribution, the square has become truly European.

It took eleven years to finalise the participatory work commissioned by the city of Bochum. And, like so many times before in its history, Europe has changed during those years. What does that mean for the promises given at the turn of the century? What kind of future did the citizens of Europe imagine?

Throughout the years the question the Square of the European Promise asks remains the same. And everyone visiting or passing it in the future will find themselves answering it in one way or another. What is your contribution to the future today? The future belongs to those who imagine it today. The new square is a monument for something that does not yet exist.

Just like Jochen Gerz’ iconic commemorative works – the Monument against Fascism in Hamburg-Harburg (1986) which has been hidden in the ground for many years now, or the Monument against Racism in Saarbrücken (1995) – the Square of the European Promise also plays with the invisible, the temporal and the contributions of living people. No other public square is the work of so many and no other square is dedicated, not to the dead, but to the living.

The lighting concept is the creation of French designer Laurent Fachard, who previously lit the facade of the Elysée-Palace in Paris, and plans for the Square of the European Promise were developed by Soan Architects.

The Square of the European Promise is a public authorship project by Jochen Gerz, commissioned by the city of Bochum and funded by the federal state government of North-Rhine-Westphalia,, the city and the protestant church of Bochum. The square finalises the Cultural Capital Year RUHR. 2010. http://www.Kulturhauptstadtjahr RUHR.2010