Don’t be fooled by its name, SLACK! will keep you on your toes, and even made them ache, once you have walked, as the exhibition guide suggests, the 36 km long stretch on which fourteen artworks by a range of established and international artists took residence.

SLACK! The exclamation and Comics-style yellow of the logo slip easily into the onomatopoeia Smack. And indeed the context of the festival, the Pas-de-Calais district and its contrasting features, can be as soothing as a kiss, or as bracing as a wave splashing across your face. Smooth sand dunes alternate with monumental cliffs, sleepy fishing villages with mining sites, bucolic sceneries with forts and bunkers. The two World Wars and the mining industry have scarred this landscape and coastline, and faraway conflicts are still wearing heavily on its reputation. Prior to my visit, I could not help but think of the Sangatte village and its infamous camp for refugees held on route to the British Isles.

For those who have the privilege to come and go freely between the two sides of the Channel, walking the sandy and rocky expanses of Pas-de-Calais is a revealing experience. The efforts put into preserving and developing access to its natural and cultural sites have paid off and earned the Deux-Caps, the ‘Grand Site de France’ status in 2012. At this time the idea for an art festival emerged and the district launched a call for application. Lille-based agency Art Connexion was amongst the candidates. Its co-director, Amanda Crabtree, explains that the brief asked for a series of land art sculptures. However, her agency proposed a series of temporary commissions as an alternative and their clear and committed curatorial vision won the jury over. SLACK! presents a compelling programme of temporary installations, performances and installations in which artists have addressed the polarities of a region which oscillates between the traumas of war and of the extinguished coal industry, and an optimistic outlook onto the future, as evidenced by its forward-looking policies on enhancing its natural and cultural wealth .

In Pointe de la Crèche, the cream coloured rocks of Didier Marcel’s Les Moutons are grazing on a hillside. The rocks perched on an elevated base of rusty concrete rods seem ready to roll off, in sympathy for the nearby bunker which is slowly making his way down the hill. Their legs of ribbed steel are beautifully slotted together to form a slanted rectangular grid shape base. On the day of my visit, as they glisten in the summer’s sunshine, they reveal little of their nocturnal conception. On a dark and foggy night, Didier Marcel was scouting the sea from cape Gris-Nez in search of inspiration when four googly eyes floating amongst a white woolly cloud interrupted him. The dreamy vision conjured up images in the artist’s mind of Les Rochers dans le Ciel, an earlier piece where the same white rocks populate the sky above the Parisian tramline.

At Cap Gris-Nez, where the sky meets the earth in liquid and hazy horizons, atmospheric conditions can turn sheep into clouds, and unexplained phenomenon transform living sheep into stones. To materialise these apparitions, Marcel referenced the torn steel rods coming out of the eroded fort, the decaying concrete and the local cliffs. As for the form of the grid, one can speculate that the artist chose it for its obvious reference to military mapping. In a manner reminiscent of Nam June Paik’s Nixon, in which copper distorts the televised speeches of the American president, Didier Marcel altered the grid to give the illusion that the base is slanting under the weight of the rocks. Should we see there a tong-in-cheek allusion to the contemporary failure of remote war waging and this despite the advent of sophisticated satellite-imaging?

Les Moutons draws attention to the traces of the conflict, which most affected the Pas-de-Calais, and to the fragility of life. Once built to be indestructible, the now crumbling bunkers speak of the destiny of inventions that were thought to be revolutionary and invincible. As I squint my eyes to the point where I can make out sheep from the angular shapes of Les Moutons, having no fog to help me in the process, I am left to ponder the becoming of Europe’s past aspirations, and the potential of its present situation. 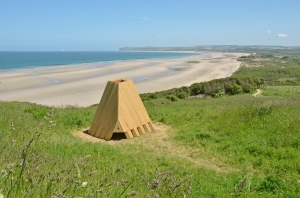 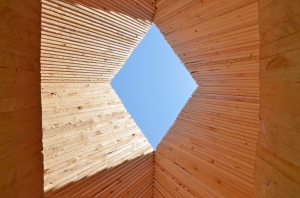 Our relationship to the animal world and to defensive architecture becomes a more embodied experience when visiting Anticamera, the sculpture by the Frères Chapuisat. Halfway between armour and cocoon, the wooden triangular structure literally puts you on your knees. Propped about half a meter off the floor, Anticamera requires walking on all fours before entering through a square manhole. Inside, the experience is warm, sensorial and wood-scented. One feels simultaneously protected from the strong winds, which sweep this part of the coastline, and trapped within a thick structure of planks assembled sideways.

Originally a duo, the Frères Chapuisat co-opt new comrades as they develop their sculptures. Skill sharing and mutual learning are at the heart of their informal brotherhood. As for the rest, a combination of humour coupled with a rigorous approach to art making seem to do the trick. “In Wood We Trust” retorted Grégory when I nagged him about the structural integrity of the piece. A leap of faith is exactly what I needed when I crawled under the plywood floor resisting the weight of half-a-dozen adults. “In Fréres Chapuisat I trust” I muttered to myself.

Their sculptures parasitically grow from existing buildings spreading through and around architectural elements such as doorways, skylights and balconies. They create an alternative world, imagine other uses which they playfully adapt to the needs of their brotherhood. Their creations, a combination of intimate spaces and tunnels, evolve outwards from an inside, often a central room where food is prepared. They may have inherited this practice from the method used for the Loire Valley troglodytes, where the Frères Chapuisat  have a summer base. For this type of dwellings, the kitchen was always the first room to be excavated.

In the Deux-Caps, in a site without walls or ceiling to push against, and with skies as their only boundary, the Chapuisat brothers reacted to air. With its triangular roof-like structure, Anticamera cleverly eschews the blowing winds by offering it as few faces as possible to rub against. And this is not all it is dodging: Anticamera is also a defence against the shooting of holiday snaps. From the inside, any attempt at catching the viewpoint onto the magnificent Cap Blanc-Nez is doomed to fail. Instead, one has a choice between peering at clouds through a hole in the roof or laying on one’s front to watch the surrounding long grasses through two diametrically opposed apertures at floor level. 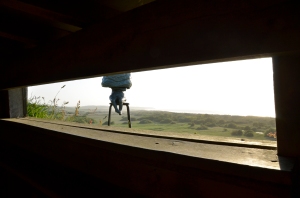 A few kilometers away, further north of Cap Gris-Nez and Anticamera, the coastline opens up onto the Baie de Wissant and its natural reserve. With Les Sentinelles by Françoise Pétrovitch, three anthropomorphic creatures invite viewers to survey the coastline from a bird’s observatory, a dark wooden hut with three long windows. Pétrovich’s ceramic figures are sitting outside of the shelter. Les Sentinelles are sitting on three human-sized off-the-shelf metallic chairs. One of them, a half-rabbit half-young girl creature is the most human-like of the three. The second one, a bodiless rabbit-head, turns its back onto the viewers whilst the third one appears as a human figure wearing an oversized sheep-head. Her body is ridiculously small on the chair and seems dwarfed even further by her attire. Is the bodiless head also an actual creature its own right or a forgotten disguise?

Les Sentinelles are close but out of arm’s reach, familiar but distant. They are looking away from the viewers, unperturbed by their presence. In a filmed interview, Pétrovitch explains that her intention was for her sculptures to relate to the landscape without being obstructive. Framed by the hut’s horizontal windows, and set off by the backdrops of the reserve, they seem to merge with their surroundings and become a living painting. In the foreground, wild grasses are bending in the wind. At any moment, one expects the movement of the plants to transfer to the sculptures. It is hard to make out whether Les Sentinelles would be friendly or threatening, silly or serious upon awakening.

With the title of the work, Sentinelles translating as Sentinels, the artist makes an incursion into the world of the military. However, rather than watching the enemy, as someone from this high vantage point probably once did, one is observing the wildlife and the beauty of the bay, with a degree of uneasy anticipation. The eeriness of Pétrovitch’s creations leads us to contemplate the fact that Nature can be a friend or a foe, something to preserve and cherish and also to protect against. Visually sited between onlookers and the expanse of the bay, Les Sentinelles act as catalyst helping viewers take the leap from the inside to the outside, from the familiar to the other, their stillness reminding them to sit tight and wait. Here in the bird-watching hut, the injunction SLACK! takes its full meaning. Observing the waters, one reflects on the journey here, all the journeys one has taken or wished to take, the ones taken by others today and in the past, but also on the crossing of borders, mental and physical. Perhaps SLACK! is simply trying to erode these ‘barriers’, real and imaginary. One has to hope that someone will listen, as ten refugees have already died in their attempt to cross the Channel since the festival opened.