Ars Electronica 2014 invites artists, scientists and researchers to Linz to engage with a specific, interdisciplinary theme supported by installations, workshops, exhibitions and symposia. The theme for 2014 is Change – and the C stands for the confidence that change will come about and the craving for it. Creativity, collaboration – whereby C also raises questions: what and whom do we need for creativity and innovation to unfold and proliferate. And C stands for catalysts, which bring us to the role art plays in social transformation processes.

Ars Electronica has invited international artists and scientists to elaborate on the framework conditions for social renewal. The programme of events for this year’s media arts festival are exhibitions, conferences, concerts, performances, open labs and workshops, nearly all of which will be staged in public places and semi-public spaces in downtown Linz. For the first time, the festival is also hosting a global summit, with Oliviero Toscani, Joachim Sauter, Golan Levin, Bradford Paxton, Hiroshi Ishii, Ryoji Ikeda, Roy Ascott, Bunker Roy, Robert Madelin and Derrick de Kerkove.

Jacob Tonski – Balance from Within:

Interpersonal relationships often prove to be a balancing act that succeeds only through ongoing give-and-take and adaptation. That also applies to Balance from Within, a 170-year-old, 40-kilogram couch balanced semi-upright on one leg through the application of a robotic mechanism installed inside it.

Toshiyuki Inoko (JP) –  Peace Can Be Realized Even Without Order

The interactive digital installation consists of a seemingly endless number of holograms. The figures shown in the holograms exist independently of one another, they play instruments and dance, and each individual is influenced by the sounds from the figures close to them. There is no lead figure that oversees or can influence all the other dancers, and there is also no center or order imposed on the crowd. External events can cause disorder, but then in time peace will gradually be restored. When someone enters the installation and a figure senses the viewer, the figure responds to their presence and stops playing music. The figure passes on this information to other figures close by. After a short period of time the figure will start playing music and dance again, but this disturbance will have disrupted the harmony. If, however, the viewer stands still or leaves, the dancers will begin to re-form into one harmonious group and the feeling of peace will return. 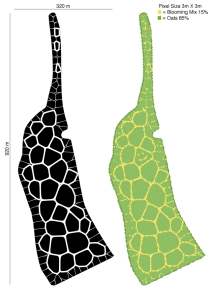 Avena+ Test Bed explores the relationship between landscape, agriculture and digital fabrication. With the advent of precision farming, agriculture has become fully mapped and will transform farming to a highly digital activity. In combination with other changes underway in the countryside, mainly the paradigm shift from food to biogas production and various EU subsidy schemes to promote diversity, within the next few years this will lead to disruptive changes for the (European) countryside. The project uses the idea of “agricultural printing” to explore the possibilities of digital fabrication carried over into farming. 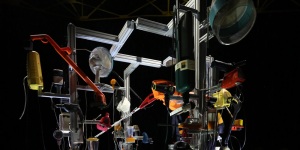 Das Vergerät (a German neologism) means something like “dis-appliance.” 100 used electric household appliances are interconnected and spatially configured as a meta-machine or meta-appliance or as a model of smart homes. 100 is the average number of appliances found in a middle-class household.

Ars Electronica 2014 Festival City: The hub is downtown Linz based around the OK Center for Contemporary Art and a zone bounded by Herrenstraße, Spittelwiese, Landstraße and the Promenade. The venues for art and presentations in the public sphere include shops, courtyards, gardens, underground garages, streets and squares, gymnasiums and classrooms, a bank lobby, a cathedral and its parish house, and even the bishop’s court.

St. Mary’s Cathedral (Mariendom) is hosting several installations, and the cathedral square and façade will play major roles in the festival’s opening with a spectacle of sound & light by Prague-based artists, Dan Gregor and Tomas Dvorak. They will transform the cathedral into a gigantic audiovisual instrument which is triggered by a laser pointer to produce hundreds of different audiovisual effects. At Bishop’s Court (Bischofshof), Sonotopia, by Anatol Bogendorfer and Peter Androsch, is a setting for an acoustic performance, “which transforms the city itself into a ‘listening space‘” to make the interplay between urban architecture and everyday life in the city audible. The artists use the spaces and surfaces of the constructed environment to form and reflect sound waves.

Sparkassenplatz is the social hub of this year’s festival. It is the site of the Future Innovators Summit, presenting a mixture of lectures, discussions, workshops and performances staged with experts in the fields of art and design, engineering, startups and social activism. Participants include: Robert Madelin (Director General for Communications Networks, Content and Technology of the European Union), Brad Paxton (former general manager and vice-president of Kodak’s Electronic Photography and Printer Products division and director of their Electronic Imaging Research Laboratories), Hiroshi Ishii (professor at the Massachusetts Institute of Technology), Joachim Sauter (co-founder and artistic director of ART+COM and professor at UdK–Berlin University of the Arts), Golan Levin (media artist and associate professor at Carnegie Mellon University School of Art) and photographer Oliviero Toscani. Markus Schmeiduch, interaction designer and current recipient of [the next idea] grant, and staff of the Ars Electronica Futurelab.

Akademisches Gymnasium will be the headquarters of u19 – CREATE YOUR WORLD. For five days, young people will stage more than 40 open labs, workshops, presentations, art projects and exhibitions that illuminate ways of dealing with the world of the future. Buddha on the Beach, is an exhibition delving into Taiwan’s difficult process of identity formation in the shadow of mighty Mainland China. Acoustic journeys of discovery are led by katrinem, a sound artist who works in Linz and Berlin, whose work shows how a person’s individual gait sounds in the context of a particular architectural environment. Plus a show by the Ars Electronica Futurelab.

Arkade: In a shopping mall, the Change Gallery is presenting over fifty video works on the subject of change and innovation. The screens on which these videos run will be set up in the display windows of the Arkade’s shops.

OK and Ursulinenhof – The Center for Contemporary Art: The CyberArts exhibition showcases the seventeen works of the 2014 Prix Ars Electronica.And the OK Centre also exhibits the work of sound pioneer Bill Fontana, last year’s recipient of the residency sponsored jointly by Ars Electronica und CERN. Ars Electronica will also honour one of the trailblazers of media art: Roy Ascott.

What is Ars Electronica?: Since 1979, through four elements – Centre, Futurelab, Festival, and Prix, Ars Electronica has sought out connections and congruities, causes and effects between art, science and research, technology and society. The ideas circulating here are innovative, radical, eccentric in the best sense of that term. They influence our everyday life—our lifestyle, our way of life, every single day.

Centre – The Museum, Presentation and Interaction: The Centre is the Museum of the Future—the place where all the diverse blends of artistic genres, scientific domains and technological directions are displayed and processed. Biotechnology and genetic engineering, neurology, robotics, prosthetics and media art are juxtaposed here on equal terms and form experimental arrays conducive to testing ways in which we might be interacting and communicating with our surroundings and other human beings in the very near future, and getting an impression of what these changes will mean for us and our society. All exhibitions focus on issues concerned with how people can deal with their environment, and offer a variety of perspectives on our nature, our origins and our world.  The emphasis is not just on interaction with exhibits on display, it is about participation and a hands-on experience.