Chilean architect Smiljan Radić has designed the fourteenth Serpentine Pavilion open from 26 June – 19 October 2014. The temporary Pavilion occupies a footprint of c. 514 sq. metres on the lawn of the Serpentine Gallery. The semi-translucent, cylindrical structure, designed to resemble a shell, rests on large quarry stones. The 2014 Pavilion is designed as a flexible, multi-purpose social space with a café sited inside. 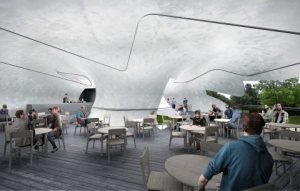 Smiljan Radić – Architect’s statement:  “The Serpentine Pavilion 2014 continues a history of small romantic constructions seen in parks or large gardens, the so-called follies that were popular from the late sixteenth century to the beginning of the nineteenth century.

In general, follies appear as ruins or have been worn away by time, displaying an extravagant, surprising and often archaic form. These characteristics artificially dissolve the temporal and physical limits of the constructions into their natural surroundings. The 2014 Pavilion takes these principles and applies them using a contemporary architectural language.

The unusual shape and sensual qualities of the Pavilion have a strong physical impact on the visitor, especially juxtaposed with the classical architecture of the Serpentine Gallery. From the outside, visitors see a fragile shell in the shape of a hoop suspended on large quarry stones. Appearing as if they had always been part of the landscape, these stones are used as supports, giving the pavilion both a physical weight and an outer structure characterised by lightness and fragility. The shell, which is white, translucent and made of fibreglass, contains an interior that is organised around an empty patio at ground level, creating the sensation that the entire volume is floating. The simultaneously enclosed and open volumes of the structure explore the relationship between the surrounding Kensington Gardens and the interior of the Pavilion. The floor is grey wooden decking, as if the interior were a terrace rather than a protected interior space.

At night, the semi-transparency of the shell, together with a soft amber-tinted light, draws the attention of passers-by like lamps attracting moths. 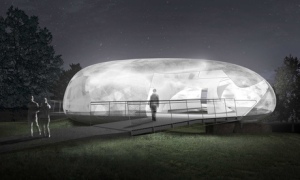 This work has its roots in the architect’s earlier work, particularly The Castle of the Selfish Giant, inspired by the Oscar Wilde story and the Restaurant Mestizo – part of which is supported by large boulders.Smiljan Radić has completed the majority of his structures in Chile. His commissions range from public buildings, such as the Civic Neighbourhoods, Concepción, Museo Chileno de Arte Precolombino, Santiago, Restaurant Mestizo, Santiago, and the Vik Winery, Millahue, and domestic buildings, such as Copper House 2, Talca, Pite House, Papudo, and the House for the Poem of the Right Angle, Vilches, to small and seemingly fragile buildings, such as the Extension to Charcoal Burner’s House, Santa Rosa, The Wardrobe and the Mattress, Tokyo, Japan, and The Bus Stop Commission, Kumbranch, Austria.

Considerate of social conditions, environments and materials, Smiljan Radić moves freely across boundaries, avoiding any specific categorisation within one field of architecture. This versatility enables him to respond to the demands of each setting, whether spatial constraints of an urban site or extreme challenges presented by a remote rural setting, mountainous terrain or the rocky coastline of his native Chile.

Smiljan Radić Clarke was born in Santiago de Chile in 1965. He studied at the Catholic University of Chile’s School of Architecture, where he graduated in 1989. Later, he studied at the Institutto di Architettura di Vezia, Italy. After travelling for three years, he opened his own practice in Santiago in 1995. In 2001 he was named ‘Best under 35 year old architect’ by the Chile College of Architects, and in 2009 he was appointed as an honourary member of the American Institute of Architects, USA. Smiljan Radić has lectured extensively and has mounted several architecture exhibitions on his work, including in 2013 – The Wardrobe and the Mattress, Hermes Gallery, Tokyo, Japan; Bus Stop for Krumbach, Kunsthaus Bregenz, Austria; Ilustraciones, Galeria AFA, Santiago; in 2012 – An Orange Tree Noise at the Hiroshima Museum of Contemporary Art, Japan and in 2010 Global Ends, Ma Gallery in Tokyo, 2010, and People Meet in Architecture, with sculptor Marcela Correa at the 12th International Architecture Exhibition in Venice. Smiljan Radić has won numerous contests such the Regional Theatre (Concepción, 2011) and the Telecomunication Tower (Santiago, 2014). His work has been published in several architecture journals and monographs, the most recent being El Croquis N° 167, Madrid, Spain. He currently lives and works in Chile.

A programme of events will animate the Pavilion throughout its four month siting in the Park. On selected Friday nights, between July and September, the Pavilion will become the stage for the Galleries’ Park Nights series, sponsored by COS: eight site-specific events bringing together art, poetry, music, film, literature and theory and including three new commissions by emerging artists Lina Lapelyte, Hannah Perry and Heather Phillipson.