The Cornelius Foundation | Constructed with Intention, 2013

The Cornelius Foundation, inaugurated in the summer of 2013 at the Château de Lagamas, Languedoc-Roussillon, France, its first Artist’s Residency and an atelier creating conversations between the various disciplines of the visual arts, music, literature, architecture, social and human sciences, and culinary and oenological arts.

The raison d’être of The Cornelius Foundation is a philosophical debate focused on the question: Can, and how can art practice and cultural experience be intentionally constructed to deliver benefits to the well being of individuals?

Peter Lowe created Mauvaises Étoiles for the 2013 residency at Château de Lagamas – 16 metal panels shaped like jagged stars, each different except for sharing the same surface area. These sculptures were designed to be installed at regular intervals along the top of the front boundary wall of the Château grounds thus being visible from both outside and within. The residency also allowed Lowe to bring one of his Transformables prototypes conceived in the early 60s to completion. His work is underpinned by geometry, spatial rhythms and relationships and has been shown in a number of key international exhibitions devoted to rigorous abstract systems and concerns, he also emphasises that rules are there to be broken. “Realism is at the core of everything I do…then I introduce a procedure, a rule…that’s what gives me the possibility of expression.”

Lowe’s work is rational, abstract and geometric. After a short figurative period, he started experimenting with abstract wood constructions in 1959. His first geometric reliefs were included in the exhibition Construction: England: 1950-60 at the Drian Galleries, London 1960. He co-founded the Systems group in 1972, and participated in a number of landmark exhibitions including Systems, Whitechapel Gallery, London, 1972; PIER+OCEAN, Hayward Gallery, London, 1980; Construction in Process I , Łódź, Poland, 1981; and Concrete Parallels: Brazilian and British Constructive Art , São Paulo, Brazil, 2012. From 1972-1974 he produced his first Volume and Void constructions. Since 1974 he has been a member of the International Workgroup for Constructive Art (Artbeitskreis). In 1974 he collaborated on musical forms with composer Michael Parsons, in the piano piece Straightjacket.

Kate Davis and David Moore. Scar, 2013. Kate Davis and David Moore’s work at the Château de Lagamas collaboratively fused their work into one identity. The starting point for the interconnected works was a poem Cicada cha-cha-cha written together in response to the cacophonous sound of the cicadas. This led to a sculptural aluminium banner attached to the wall of the house with text from the first two lines of the poem; a series of collages and drawings; and an intervention, using locally sourced pigment, directly onto the trunk of one of the Aleppo pine trees in the Château garden. “Our work responds to the physical and cultural environment of Lagamas and the surrounding region: the sounds, the temperature and the community.”

Kate Davis and David Moore. Scar. Detail of the first 2 lines of the poem (water-cut on aluminium). Lagamas 2013

Kate Davis and David Moore. Kate Davis is Tutor in Sculpture at the Royal College of Art, London. David Moore is Head of Sculpture at Edinburgh College of Art. They formed ME / WE Productions in 2008 and have collaborated on projects internationally, including London, Edinburgh, Berlin and Tokyo. Kate Davis is primarily a sculptor whose practice includes performative lectures, video, drawings, texts and objects; which are often all brought together in the same exhibition. Her work addresses issues of the heart, mortality and desire. David Moore leads HUB, an interdisciplinary research cluster centered on sculptural practice, exploring the building, exhibiting and situating of works. His recent collaborative works have been developed with Kate Davis. Their first film The Cut was short-listed for the Swedenbourg Short Film Award in 2011; they participated in Art in the Park, University of Nottingham, 2013; and a commission Light and Water will be installed at the Riverlight Development, Nine Elms, London in 2014.

Joana da Conceição. Animal Esthétique 1.  Trained as an academic painter, her paintings now occasionally take the form of 3-dimensional installations that can extend beyond gallery walls. “As an artist I am always trying to make sense of the world, mapping time and space, physically and emotionally.”  The round stone table in the garden of Château de Lagamas was the primary inspiration for her site-specific piece. Animal Esthétique 1 uses a combination of house paint and local ochre and red (Salagou) soils to map the primaeval movement of the sun while also tracing the horizontal and vertical axis of the surrounding grounds and architecture. 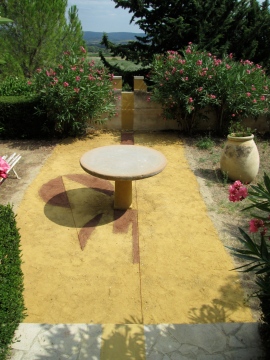 Joana da Conceição, was born in 1981 and grew up in Santa Tirso, 5 kms from Guimaraes, Portugal, and lives in Lisbon. She graduated in BA Fine Arts – Painting from the Faculty of Fine Arts plus a Master’s degree in Contemporary Art Practice, University of Porto. Awards include the Award Anteciparte, 2005, Leipzig; Capacete Residency, Rio de Janeiro, Brasil 2010-11; the zdb residency program, Lisbon 2011; and The Cornelius Foundation residency at Lagamas, 2013. She exhibited in Guimarães, Arte Contemporânea 2011 at the Exposição | Palácio Vila Flor, Guimarães, and solo and group exhibitions in Portugal, Brasil and Germany.

Sean Dower’s performance was constructed using locally sourced materials whilst on the residency at the  Cornelius Foundation. A variety of instruments and sound producing devices  were woven into a 24-minute performance combined with pyrotechnics and other visual effects. Instruments used for the performance included tuned vibraphones, pyrophones, chimes,  resonant steel sheets, gongs, pyrotechic projectiles, explosives and a cement mixer. 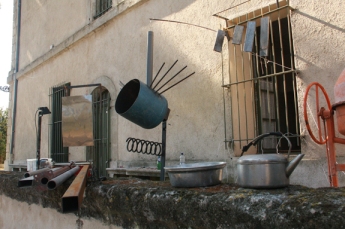 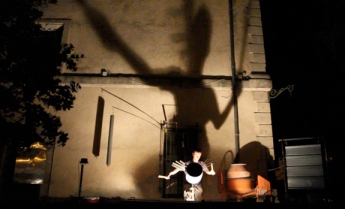 Sean Dower produces works in sculpture, photography, film, sound and live performance. His works in various media often retain a performative element. Dower was involved in the industrial music scene of the early 1980s and then worked with the radical performance art group Bow Gamelan Ensemble. He studied Sculpture at Camberwell School of Art and Design and attended the residency programme of the Rijksakademie van Beeldenden Kunsten, Amsterdam. He has been engaged in music and live performance since 1983, and has been presenting his work internationally in galleries, museums and other contexts including MoMA New York; Tate Modern, London; Anthony d’Offay Gallery, London; and Krinzinger Gallery, Vienna. Recent exhibitions and performances have included: De La Warr Pavilion, Bexhill UK; Southard Reid Gallery, London; Tate Britain, London; IKON Gallery, Birmingham; and Netwerk Centre for Contemporary Art, Aalst, Belgium.

Eric Fischer, composer, saxophonist and keyboard player, and saxophonist Romain Tallet’s, week long residency at the Château de Lagamas, culminated in concerts, held in the chapel and church of the village, and a series of musical improvisations in dialogue with the visual works of the artists in residence. The premiere of Constellations Obligatoires was composed in relation to Mauvaises Etoiles by Peter Lowe. 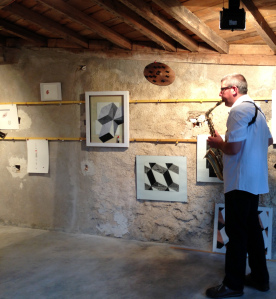 Eric Fischer has composed more than 200 works, ranging from pieces for solo instrument to symphonic form, including chamber music, electronics, vocal works, incidental music for the theatre, improvised music, and pieces for period instruments. Artistic collaborations include a mutually fruitful relationship with the Japanese choreographer Shiro Damon; the foundation of the ‘Collectif de la dernière tangente’, with the Swiss visual artist Bernard Garo and the actor François Chattot, which offers astonishing pluridisciplinary immersions; the music for Johanna Vaude’s film L’œil sauvage, 2006; collaborations with poets including Dominique Brand and Emmanuel Damon; and compositions for artists such as Richard Galliano, David Liebman, François Bou, Jacqueline Méfano, Marianne Muller, the Riga Quartet, the Ensemble FA 7, Jean-Pierre Baraglioli, the Boréal Quartet, the rock collective Adélaïde, the Latvian Philharmonic Chamber Orchestra, and Sylvain Kassap. Alongside his writing of notes, he has always ‘composed’ in words, saying with the latter what the former cannot express and vice versa.

The Cornelius Foundation was founded in 2011 to explore the potential meaning, contribution and purpose of art in the life of the individual. The foundation runs a programme of multi-disciplinary exchanges with the view to stimulate experimentation and dialogue, in the shape of elective seminars, residencies, projects. Its mission includes the establishment and facilitation of a multi-disciplinary network associating these subjects, and their promotion and dissemination.

The founding principle of The Cornelius Foundation Artist’s residencies is to offer artists a new environment in which their practice can be both challenged and developed, with such exploration and experimentation being further informed by conversations with visiting guests and exchanges with local communities. It is the foundation’s desire that each residency should offer a forum for the expansion and development of creative endeavours, and thereby encourage the artist to leave an enduring mark on the environment.