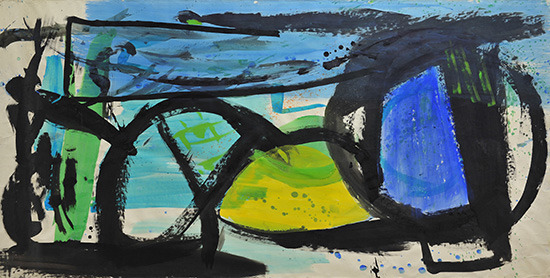 Peter Lanyon: The Mural Studies 1959-1963. An exhibition at Gimpel Fils gallery, London focuses on the three major mural works he completed between 1959 and 1963; at Liverpool University – The Conflict of Man with Tides and Sands, 1959-60; at the house of the American collector Stanley J Seeger at Frenchtown, New Jersey, 1962, and at Birmingham University, 1963. The exhibition includes the final large-scale gouache sketches for the Liverpool and Birmingham murals, as well as other studies and work derived from Lanyon’s exploration of the medium.

In a recorded interview in 1962 Peter Lanyon spoke of his enthusiasm for the medium: “I’m beginning to like mural painting more and more. It suits landscape painting and modern architecture – the modern glass buildings…Part of the challenge of the mural is to understand something much bigger than yourself – one I’m doing for America is over 30 feet long – and we don’t have the old kinds of walls any longer. We have sides of glass; walls that are windows onto space; that enclose space. It’s tremendously exciting to paint for them.”

Peter Lanyon was born in 1918. The son of Cornish parents, he was passionately involved with his native landscape. He thought of himself as a true landscape painter in the English tradition and despised being linked with the ‘St Ives School’ – He made paintings, he said, which owed their existence to the place and not ‘New York or the Moon’. Breaking away from the early influences of Gabo and Nicholson, he quickly forged a unique vocabulary born of his interaction with the western Cornish peninsular. He explored it by foot, from the air – through his gliding experiences, by car, and from beneath – climbing down into local mine shafts. His ‘constructions’ were explorations of spatial concepts realised through his experiences and were often studies for translation to the plane of the canvas.