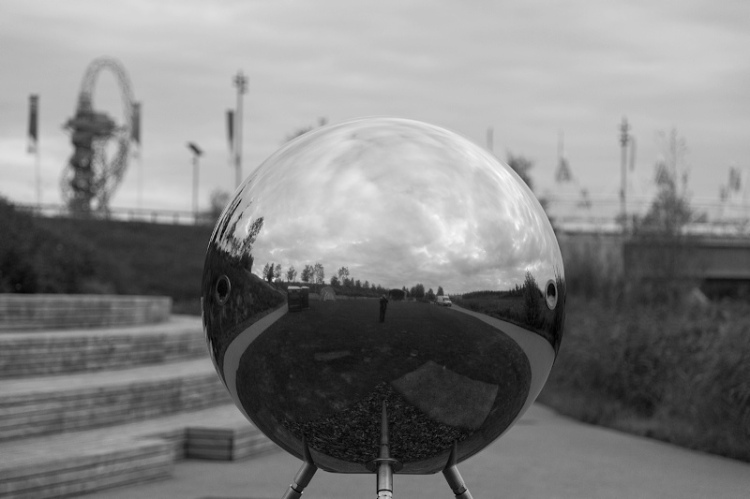 The first commission has been realised for the Queen Elizabeth Olympic Park, the post-London 2012 Olympic Park.  Jem Finer’s three Spiegelei, camera obscura and cyclorama sculptural works, invite the visitors to immerse themselves in a 360-degree panoramic projection space to reveal new live images of the Park. In the context of Finer’s work, the spherical camera obscura continues an engagement with landscape, time, space and the cosmos which includes Longplayer, a one thousand year long musical composition commissioned by Artangel; sculptural radio observatories built in Oxford and Northern Ireland and Everywhere All The Time, a drawing machine animated by signals from the hiss and static of the early universe.

Jem Finer’s work invites the viewer to look at landscape in a new way. The simple but magical function of Spiegelei is shared with a number of devices that include apparatus such as the camera obscura, the Claude Glass and the camera lucida, which have connections with science and function as popular entertainment as well as art. These simple devices explore and reveal the way that we see the landscape and insights about vision itself. They ask questions of the function of art to show the world around us in a way that makes us see it afresh, perhaps to heighten our awareness of what might otherwise be overlooked.

Danielle Arnaud and Jordan Kaplan, Parabola, have been selected by the London Legacy Development Corporation to curate a series of temporary artworks for the Queen Elizabeth Olympic Park.