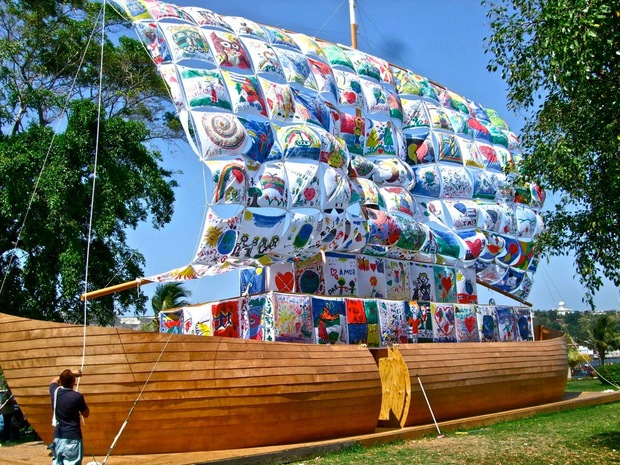 In 1494, Sebastian Brant published Das Narrenschiff, or The Ship of Fools, a popular satirical tract describing a representative cargo of follies and vices, undertaken by an ensemble of characters, voyaging towards the destination of Narragonia – the island of fools. Chapters were devoted to such offences as Arrogance Toward God, Marrying for Money, and Noise in Church. The idea also inspired Hieronymous Bosch’s painting, Ship of Fools. The Ships of Fools existed in reality as the mentally ill were indeed transported around the waterways of medieval Europe….

“Renaissance men developed a delightful, yet horrible way of dealing with their mad denizens: they were put on a ship and entrusted to mariners because folly, water, and sea, as everyone then ‘knew’ had an affinity for each other. Thus, ‘Ship of Fools’ crisscrossed the sea and canals of Europe with their comic and pathetic cargo of souls. Some of them found pleasure and even a cure in the changing surroundings, in the isolation of being cast off, while others withdrew further, became worse, or died alone and away from their families. The cities and villages which had thus rid themselves of their crazed and crazy, could now take pleasure in watching the exciting sideshow when a ship full of foreign lunatics would dock at their harbours.” Jose Barchilon. Madness and Civilization

The metaphor has been inverted to become a more positive and progressive worldwide public art project. The Ship of Tolerance by artists’ Ilya and Emilia Kabakov will be presented at Brooklyn Bridge Park on September 27, 2013 as part of the 17th annual DUMBO Arts Festival. It is a global project dedicated to educating and connecting children from different continents, cultures, and identities through the universal language of art. It first launched in Siwa, Egypt in 2005 and since then has been created in Venice, Italy; San Moritz, Switzerland; Sharjah, UAE; Miami, FL; Havana, Cuba, and Moscow.

Human beings are members of a whole,
In creation of one essence and soul.
If one member is afflicted with pain,
Other members uneasy will remain.
If you’ve no sympathy for human pain,
The name of human you cannot retain.

The mission of The Ship of Tolerance is to educate and connect youth of different continents, cultures, and identities through the language of art. The ship is a conceptual piece intended to reflect how divergent cultures interpret tolerance and how these interpretations overlap. The ship’s sails are stitched together from paintings by hundreds of local schoolchildren from different ethnic and social backgrounds, and convey a message of tolerance and hope. By participating in the creation of this ship children learn about respecting different cultures and ideas while appreciating how they differ from their own. In short, through this creative process they will both demonstrate and gain a vibrant lesson in tolerance.

The Ship of Tolerance at Brooklyn is a joint collaboration with Studio in a School art instructors who led workshops for hundreds of students, aged 5 to 13, in public schools throughout the five boroughs. By July 2013, more than 500 children had made paintings expressing their interpretations of tolerance. An additional 100 paintings were created in drawing sessions in city parks on Staten Island and Brooklyn hosted by Studio in a School and The Noble Maritime Collection. A selection of 150 student paintings were sewn together to create the sail for the ship, with the remaining paintings on display throughout the city.

The ship is built anew for each venue and for Brooklyn the ship was built at Miller’s Launch, Staten Island over two weeks. Originally modeled after an ancient Egyptian sailing vessel, the ship is constructed with a wood frame and measures approximately 66-feet long by 23-feet wide.

This is the sixth manifestation of the ship. Originally the artists intended to construct two ships and simultaneously unveil one in Miami and the other in Havana, celebrating the historical and cultural ties between the two. This proved politically impossible, and as a compromise, one ship graced Miami’s shores during Art Basel during December 2012, and another now resides on the grounds of Old Havana’s historic fortress, Castillo de la Real Fuerza, for the duration of the Biennial. After that, it was donated to the Maritime Museum as an educational facility.

The Ship of Tolerance is in Brooklyn Bridge Park from September 27 – October 8th 2013 as part of the 17th annual DUMBO Arts Festival.

Ilya and Emilia Kabakov’s work has been exhibited in the Museum of Modern Art in New York, the Hirshhorn Museum in Washington DC, Museum of Contemporary Art in Chicago, Whitney Museum of American Art, the Stedelijk Museum in Amsterdam, Centre George Pompidou, Paris, State Hermitage Museum in St. Petersburg. In 1993 they represented Russia at the 45th Venice Biennale with their installation The Red Pavilion. They have also completed many public commissions in Europe and received a number of honours and awards, including the Oscar Kokoschka Preis, Vienna, in 2002, and the Chevalier des Arts et des Lettres, Paris, in 1995. In 2008 they were awarded the Praemium Imperiale. The Ship of Tolerance project was awarded the Cartier Prize for the best art project of the year in 2010.

The Ship of Tolerance. Havana, Cuba

The Ship of Tolerance. Venice, with Ilya Kabakov