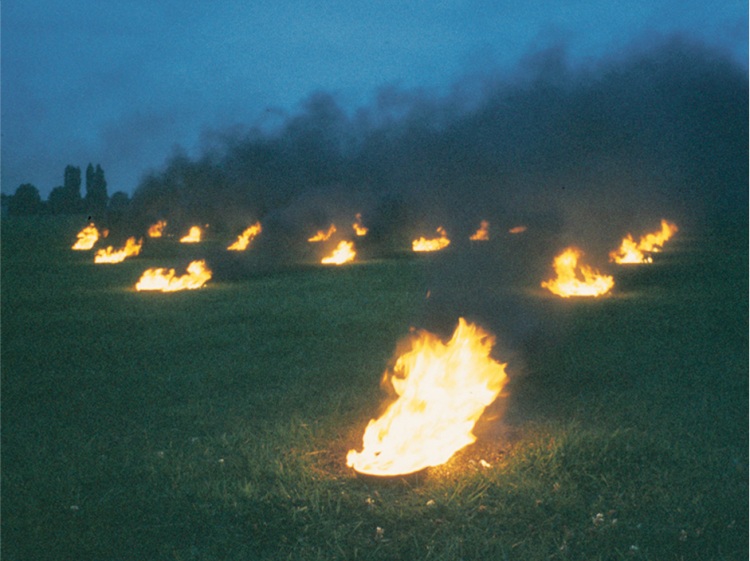 Uncommon Ground: Land Art in Britain 1966-1979 features the work of 24 artists and artist groups working between the mid-1960s and late-1970s  and examines the meaning Land Art might have in a British context, where landscape has long been a recognised element of national art and identity. It questions how landscape and nature came to be key concerns of Conceptual art in Britain and explores the unique characteristics of the way Land Art developed in the UK. It includes the most significant artists working in that period including Tony Cragg, Antony Gormley, Hamish Fulton, Richard Long, Anthony McCall and David Nash. Although the lack of work by Stuart Brisley is an omission. The exhibition treats the work with academic reverence and seriousness leaving the spectator to ponder on a world of hirsute males and 24-inch flared trousers, and occasional narcotic experiences that led to elements of playfulness and experimentation. Ian Hamilton Finlay’s Sundial: A Small Interruption in the Light, 1977, represents his sculpture garden in Little Sparta, but can only indicate the context of a richer poetic publishing work. The Boyle Family’s Atlas for a Journey, not included in the exhibition, was a project for a selection of a thousand sites on the earth’s surface selected by darts thrown or fired by blindfolded members of the public between September 1968 and July 1969. Dig,1966 is a film showing the Boyle Family and friends collecting Urban Archaeology from random sites in the London area. Derek Jarman’s film, A Journey to Avebury, shot on a hand-held Super-8, is a slightly magical journey to the megalithic stone circle in Wiltshire with yellow toned passing visions of the rural landscape.

The exhibition reveals the distinct forms that Land Art took in Britain: predominantly conceptual and ephemeral, hand-made and organic. The key strategies developed in the UK included the photographic documentation of actions, the positioning of walking and travelling as creative acts, combined with an exploration of locality and a keen awareness of rural traditions and contexts. At the same time, the term ‘landscape’ was also being questioned and transformed by artists, provoking a renewed interest in older forms of landscape art, and in historic landscapes. From being seen as something old-fashioned and redundant, landscape became the ground of radical artistic experiment.

Tony Cragg. New Stones – Newton’s Tones, 1978. Cragg made this sculpture in an era of growing ecological concern, where the profusion of plastic detritus discarded in the environment was one sign of the more general impact of humans on the planet. The plastic objects and fragments of this sculpture were found and collected by the artist along the river Rhine in Germany, near his home. They were later sorted and arranged on the floor in the approximate sequence of colours in the spectrum of white light, as identified by Sir Isaac Newton, and appear dematerialised like light or a rainbow.

Richard Long, Stone Circle, 1972. This is one of Long’s first indoor gallery works made of stones. The 61 stones came from the seashore near Portishead, not far from where he lives. Long has travelled extensively to make his work and often sources stones that are local to his exhibitions. Over time he has used a vast range of stones from around the world in his sculptures. However, the environs of his home in Bristol are deeply important to his work and he has also repeatedly stated that he could make his work within a few miles of his home in Bristol. The diversity of colour and shapes in even this small selection of local stones gives one a sense of how rich an environment any place can be if its materials are looked at closely.

Anthony McCall. Landscape for Fire, 1972. A film based on an event held on 27 August 1972 at North Weald Airfield in Essex. McCall mounted five short ‘Landscape for Fire’ events from 1972 to 1973, followed by three ‘Fire Cycles’ events of increasing duration in 1973 and 1974. He called the events ‘conditions’, suggesting a state of mind or an instruction rather than a performance or theatrical event, and although these events were formally structured they embraced the natural conditions such as gathering darkness and wind and mist. The events were deliberately slow, extended, and non-spectacular, with no single point of focus, but are suggestive of ancient rituals such as the lighting of beacons to mark auspicious events. 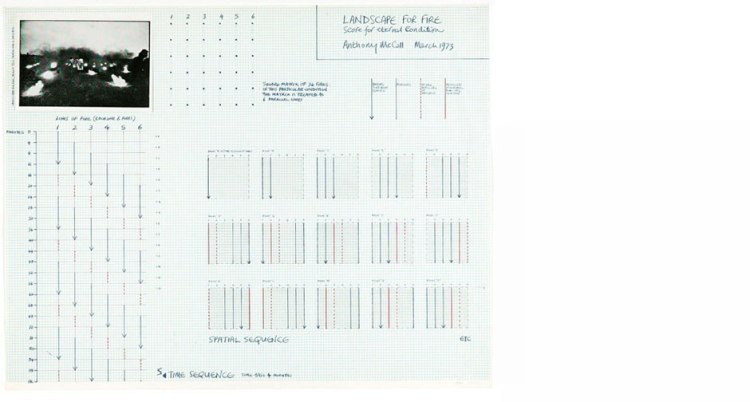 Roger Ackling. Five hour cloud drawing, 1980. Ackling’s work is made by focussing sunlight through a hand-held magnifying glass to burn tiny dots onto card. This is both a form of drawing, as the work’s title suggests, and also a kind of primitive photography (Henry Fox Talbot, an early pioneer of photography, described his calotypes as ‘sun pictures’). Because each point is focussed upon for the same length of time, when the sun is occluded by cloud the burned dot becomes lighter or even non-existent, when the sun is strong the dots form into dark lines. The work thus captures the changing light conditions in a particular location over a specific period of time.

Publication: Produced for the exhibition exploring some of the key themes of the exhibition alongside entries on all the featured artists, with texts by the curators – Nicholas Alfrey, (University of Nottingham) Joy Sleeman, (Slade School of Art, University of London) and Ben Tufnell, (Writer and Curator). £9.99 from https://shop.southbankcentre.co.uk/uncommon-ground (RRP £12.99)