HOUSE 2013 take visitors on a thematic journey around the idea of Knowable/Unknowable landscapes across venues and spaces in Brighton & Hove. Brighton, has had a reputation for being London-by-the-sea, cool, alternative, LGBT and bohemian, yet the Documenta-Manifesta-Frieze-Miami-Basle-Bienal-Trienal global visual art spectacle had largely by-passed this city of culture, and 480,000 inhabitants. The Brighton Festival, however, is, after Edinburgh, the second largest arts festival in the UK. In 2009 Anish Kapoor was artistic director, and HOUSE 2013 has been curated by Celia Davies, acting director and head of programme at Photoworks. Mariele Neudecker is the lead artist supported by a series of satellite works commissioned by artists Dylan Shipton & Ben Fitton,  David Wightman, Andrew Kotting with Anonymous Bosch,  and Emma Critchley and located on the seafront and St Peter’s Gardens.

Mariele Neudecker’s Heterotopias and Other Domestic Landscapes shown in the ongoing heritage restoration of the Regency Town House presents video images of  the remotest parts of the ocean in a multi-layered body of connecting works melding sculpture, video and photography. Descending from the earth’s stratosphere to the bottom of the South West Indian Ocean, Heterotopias, presents photographs of intense, diffuse Arctic suns with hand drawn vapour trails; a sculpture of a iceberg made after Neudecker circumnavigated an Arctic iceberg, shown with films, polaroids and pinhole photographs; light boxes depicting the sun simultaneously rising and setting in the Azores and Australia; and in the dark cellars of Regency Town House, various video works travel 2000 fathoms deep to a seemingly deserted seabed, colossal underwater mountain range and the vast abyss of deep sea space.

A parallel exhibition from 4-26 May, The Air Itself Is One Vast Library, at the Lighthouse, for Brighton Festival, explores military technologies of the Cold War in a former US site in Greenland – features a graphite frottage of a Nike Hercules missile, and underwater dumping sites of obsolete  rockets and weapons.

David Wightman’s Hero, presents a single painting in a small glass pavilion on the seafront. A large-scale ironic / idealised painting of a found / sublime mountainscape using a collage and marquetry technique incorporating textured wallpaper fashionable in the 1960s, that seeks to impart a sense of melancholy and failed beauty in an unknowable landscape viewable from inside a glass pavilion. 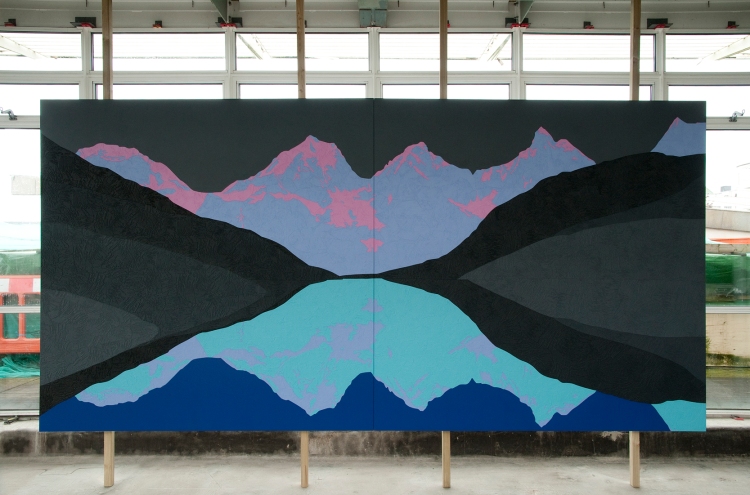 Ben Fitton & Dylan Shipton’s collaboration on Monument to the Excluded Middle, in St Peter’s Church Gardens is a sculptural re-enactment of a crashed Zeppelin / Airship using B&Q DIY building-site technology of lengths of wood and opaque plastic sheeting. The work refers to the invention of the powered airship and its fundamental impact on exploration, and militarist history as an earlier form of Cold War power-broking. Its imploded carapace can be read as a metaphor for the essential impotence and self-destruction of military aggression. 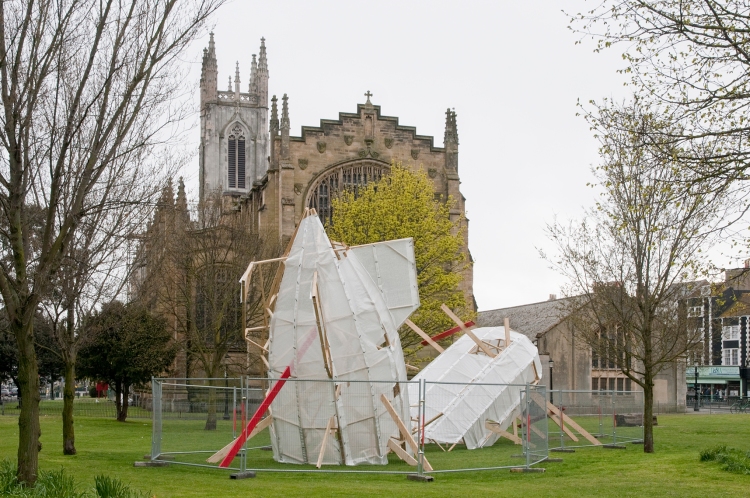 Andrew Kotting and Anonymous Bosch’s Underland: Beyond the Mounting Fear, is an installation of pinhole camera images, sounds and artefacts in an unused seaside retail unit.  The work combines the experience of Kotting’s near-fatal motorcycle accident earlier in 2013 and a journey into Hastings Caves, traditionally used by the fishing community and associated with smugglers, creating links with French Pyreneean culture. The installation of pinhole camera images taken in a house with access to caves from their living room and bathroom in Hastings, was juxtaposed with the evidence of the motorcycle crash – the clothes cut from his body and displayed on the wall and pinhole camera images of his hospitalisation.

Emma Critchley’s Aria projected inside a 30ft shipping container on Brighton’s seafront, depicts a female swimmer in a black bikini figure reminiscent of the mosiac figures in the 3rd century AD murals in the palace at Villa Romana del Casale, Sicily, moving within the depths of an underwater landscape, the film inverted so that the swimmer appears to be swimming in air above the water. A female soprano provides gravitas in an atmosphere of timeless, ambient, aquatic classicism.

HOUSE 13 is supported by an Arts Council England National Lottery funded Grants for the Arts award.

A starting point for HOUSE was the lack of a major, dedicated, contemporary art space in Brighton, and the consequent limited opportunities its citzens, students and visitors had to view internationally regarded artists…Using domestic locations and other small artspaces we wanted to address this issue as well as to provide commissioning and exhibiting opportunities for emerging regional artists. Whereas Artists Open Houses is an inclusive open to all festival, HOUSE was designed to bring a curatorial vision and focus to the visual arts in the city during the May festival.” Judy Stevens, House Director