Laura Vinci’s LUX, in 2008, was a dialogue with the space where the building was visible through an installation of c.500 crystal glasses, of three different sizes and shapes, with some illuminated by lamps, suspended from steel cables.

Marcelo Moscheta’s Installation Contra.Céu (Against the Sky) in 2010 presented a mirror image of the sky as an original drawing on a 3.5 by 5 metres polished steel plate. “From the physical and symbolic idiosyncrasies of the place as well as from the attempt to respond to these characteristics, Moscheta decided to challenge himself to bring the sky- or at least a considerable fragment of the sky- inside the Chapel. If it is not possible to bring the Heaven promised on the Scriptures, the artist tries to depict our mundane sky at least, the one which colors the ocean, feeds dreams, conforms to our most archetypical idea of landscape and reaffirms our inescapable earthly condition…The grayish panel positioned in the back of the Chapel, as if it were an altar, occupies barely the whole width of the room confronting the public frontally. It is worth remembering that this altar is the place where rehearsed rites potentialize epiphanies, which find a direct reverberation on Contra.Céu.” Guy Amado. On the Sky and Other Earthly Instances

José Leonilson‘s retrospective exhibition in 2011, Sob o Peso dos Meus Amores, (Under the Weight of My Loves), re-assembled an exhibition from 1993, and commemorated 20 years of exhibition programmes in the space. Leonilson discovered in 1991 that he was HIV positive, and living with the symptoms of Aids dominated his work. The installation of drawings, paintings, embroidery, sculptures, books and collections of globes, maps and toys expressed the dramas and anxieties of his situation.

In 2012, Tatiana Blass’ Penelope, explored both interior and exterior of the Capelo do Morumbi. “The work consists of a 14-metre long red carpet extending from the chapel entrance to the main altar, where its end is attached to a hand loom equipped with foot pedal, thus giving the impression that the carpet weaving is under way. In the other side of the loom, tangled yarns are stretched out to pass through holes in the wattle–and-daub wall and reach the outside area. The red yarn takes over the greenery of the museum garden, covering the lawn and climbing shrubs and trees. In this process, it creates an ambiguous movement of construction and de-construction, in a reference to the Greek myth of Penelope.” 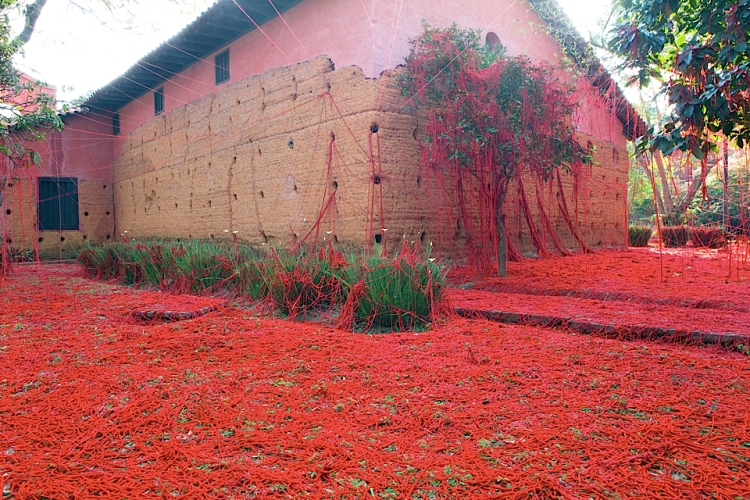 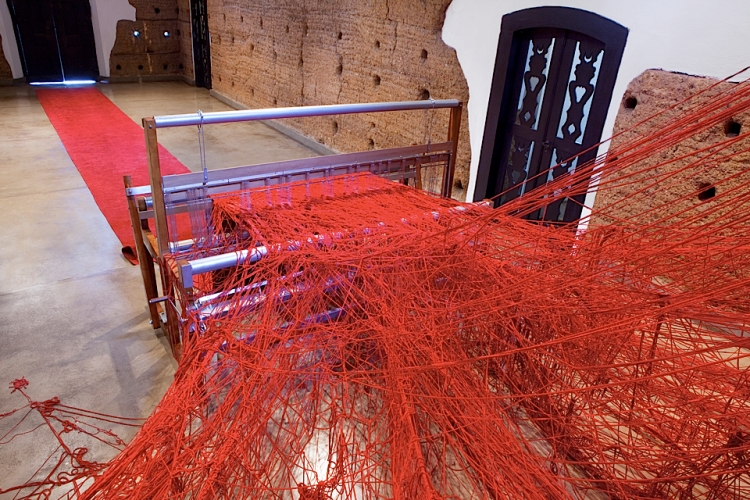 Iran do Espírito Santo’s installation Receu, translates as Retreat or Recoil or Kickback. Receu presents a dialogue between architecture and a direct intervention in the environment. 54 shades of gray are placed in strips on a wood and plaster panel that exactly fits the dimensions of the back wall of the chapel. The lines progress from light to dark, suggesting the illusion that the room is prolonged. As the ratio between object and space scale is altered, the perspective of the space is changed, creating an ambiguity between reality and abstraction. His sculpture, drawing or wall painting, investigates codes of representation, transforming ordinary objects into ideal models of pure geometric form.