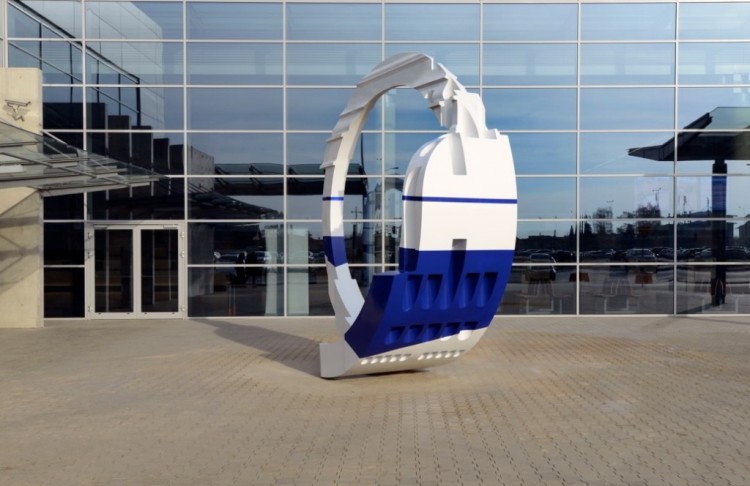 British artist Nick Hornby’s Old Shapes, New Brutality is a new monumental sculpture commissioned for the Mediations Biennale 2012 in Poznań, Poland. Sited at the new Poznań-Lawica Airport, it is inspired by the architecture of Poznań – in particular, three buildings from the city – the renaissance town hall, a neo-classical church and a modernist circular tower.

Brutality and beauty, hunger and hybridity: in British artist Nick Hornby’s recent commission for the Mediations Biennale in Poznań, Poland, the forgiving forms of a renaissance town hall, a neo-classical church, and a modernist circular tower collide in an irreverence and an abstraction of architecture. An overwhelmingly circular structure, augmented by vestigial porticos and by the interstitial scarring of a process of mapping form upon form, Old Shapes, New Brutality (2012), composed in brilliant white and adorned with a self-referential blue stripe, stands auspiciously sited at the entrance to the Poznań Airport, itself the vision of architect and project co-commissioner Peter Barełkowski.  Hornby’s work, conceived during a research residency at the Eyebeam Center in New York City, explores a candid drive on the part of the artist to utilize form as hypothesis, employing a three dimensional manifestation of the Boolean operation (the convergence of data sets, often represented in a binary, whose initial propositional logic is meant to result in a yes or a no—an outcropping of decision theory).  Yet architecture does not respond to true or false.  A façade, though it may predict power or culture, the very manifestation of the icon, provides no parlance to right or wrong, save in Alberti’s postulations or DaVinci’s proportional demands.  What is produced, even proposed, by this monumental sculptural challenge to perception and horizon is a dissolving, in the pursuit of process, of any presumed necessity of a pre-thought image.  What results is at once accidental and intended, citational and authored, meta-modernist and the very act of deconstruction—the formal darling of iteration and chance.

Art re-orders the world.  In Hornby’s previous work, also applying an investigative structure, the artist utilized the self-same citation mode in the name of invention.  Through computer modeling and later hand rendering, Hornby melded the silhouettes of busts from the Victoria and Albert Museum, demanded a Barbara Hepworth commune with Rodin’s Man walking, and even created an archival record between the common Victorian table leg, an automobile axle, and the sculptural remains of the cinema classic Star Wars.  Such is the assault on the icon which is Hornby’s oeuvre: a method of violent de-contextualization conflating the artifacts of absorbent kitsch and high modernity, or high modernity and low-classicism, whereby nothing is sacred—hybridity always produces transgression, even horror, in the production of forms as yet or previously unknown.  However, Hornby’s recombinant efforts violating the DNA of visual culture are never horrific, but rather always err on the side of beauty, an uncanny elegance, whose very brutality exists at the limits of the referential. His is an art which manifests the promises Robert Morris proclaimed in 1969; an art that is, Of disorientation and shift, of violent discontinuity and mutability, of the willingness for confusion even in the service of discovering new perpetual modes—this is the verbal applied to seeming static form.

And yet, Hornby’s present work, Old Shapes, New Brutality, surpasses even Morris’s pledge.  In terms of a process he calls meta-modernity, the artist comments “After a year of doing it with sculptures (modern or historic) I made a turn to architecture”, in a simple statement which is anything but.  For if architecture implies the production of peopled places, ever sullied by a humanity which would inhabit them, so does Hornby’s interruption of architectural space by sculptural practice advance the fetishization of a post-human perspective, of dissolution, of void.  Like the gaping emptiness which occupies the centre of the work itself,  this work at once heralds absence and calls forth a hunger for new forms demanding to be filled.  It is for the viewer to decide what to consume. 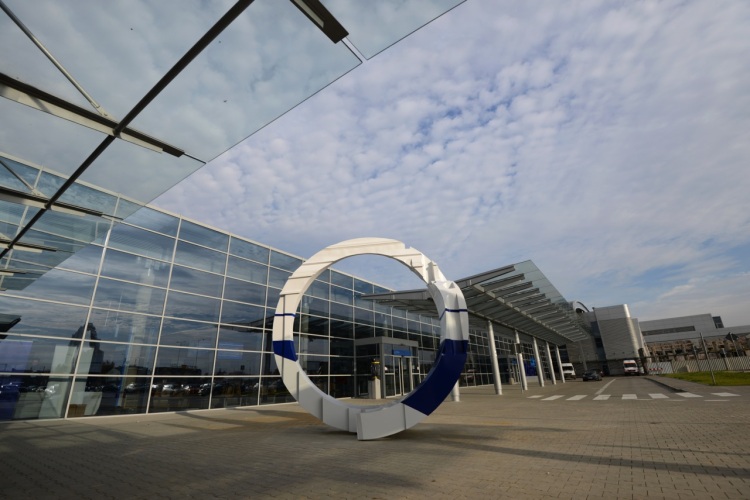 The curators for the project were Denise Carvalho and  Tomasz Wendland, in cooperation with the Poznań-Lawica Airport, and the airport architect Peter Barełkowski. This is the second commission for public art within the 3rd Mediations Biennale 2012 in Poznań

Nick Hornby, born in 1980, is a British artist living and working in London. Awards include the Clifford Chance Sculpture Prize, RBKC Artists’ Professional Development Bursary, the Deidre Hubbard Sculpture Award, the BlindArt Prize and he was shortlisted for the inaugural Spitalfields Sculpture prize and Mark Tanner Sculpture Prize. A sculpture is sited at Andaz 5th Avenue, New York, and a commission is in progress for One Canada Square, Canary Wharf in 2013.

Nick Hornby. An early version of Old Shapes, New Brutality. Exhibited at The Return at The House of the Nobleman, London 2011

Exhibition: The Return at The House of the Nobleman.