PMSA: The Marsh Award for Excellence in Public Sculpture 2012

The winners of Marsh Award for Excellence in Public Sculpture for 2012 are Comedy Carpet by Gordon Young, and 2004 Indian Ocean Tsunami Memorial by Carmody Groarke. The award for the Marsh Fountain of the Year Award was won by Ustigate Ltd. 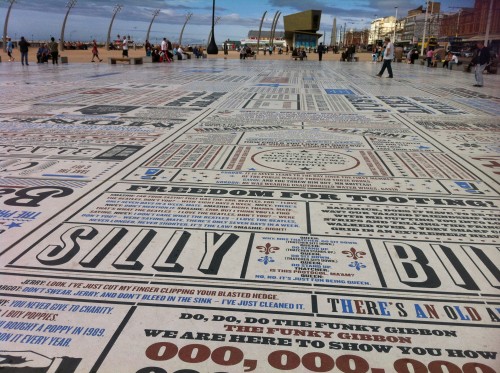 Gordon Young. Comedy Carpet. Created by artist Gordon Young, and designed in collaboration with Why Not Associates, the Comedy Carpet is a celebration of comedy, public art and typography on a grand scale. Referring to the work of more than 1,000 comedians and comedy writers, the carpet gives visual form to jokes, songs and catchphrases dating from the early days of variety to the present. Sited in front of Blackpool Tower, the 2,200-sq.metre work of art contains over 160,000 granite letters embedded into concrete.

Carmody Groarke. Tsunami Memorial. The 2004 Indian Ocean tsunami was one of the worst natural disasters in living memory, hundreds of thousands of people lost their lives and the impact of the devastation was felt across the world. The design of the memorial sited in London at The Natural History Museum, reflects the views and feelings of UK survivors and bereaved families and is the product of months of dialogue between them and the Carmody Groarke design team.

The other short listed sculptures were: 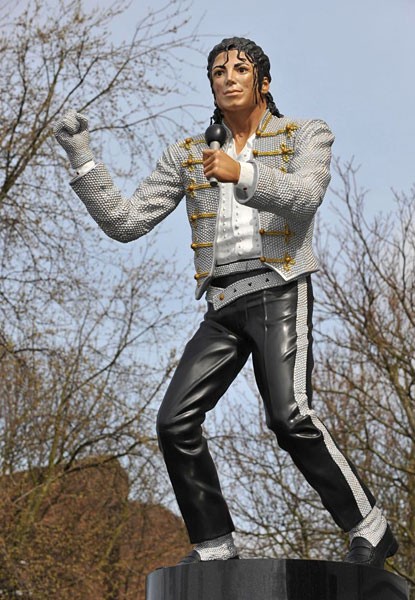 William Mitchell. Michael Jackson.  Commissioned by Mr Al Fayed on the day he heard that Michael Jackson had died. The design is based on ‘Man In The Mirror’, image of the musician’s persona. The 7ft 6in high, two-and-a-half tonne granite base is incised with a verse and music from the song. The statue was created from clay, with the finished figure cast from the mould using a plaster and resin mix. The commission was placed at Fulham Football Club, London, owned by Mr Al Fayed.

Holger Lonze. To the People of the Sea. The sculpture takes its inspiration from both sails and the sea alike: the iconic Drontheim’s passage rig and sails become a metaphor for th e curving surface of the sea; the flapping sails of a jibing yawl metamorph into crests of breaking waves as the bellowing sail canvas is turned into sheets of glistening bronze. The sculpture sited on Portrush Beach, Northern Ireland is a metaphorical vessel for sea-related imagery that offers many angles of interpretation: It suggests a sea creature emerging out of the depth of Irish mythology and associations with prehistoric megaliths. Its vertical surface of an angry ocean is a reminder of legendary voyages, while the rich texture and deep blue colour of its surface is a glimpse of the depth of the ocean.

Kendra Haste. Royal Beasts. In 2010 Kendra was awarded a commission by Historic Royal Palaces to fabricate thirteen sculptures as part of an exhibition ‘Royal Beasts’ celebrating the history of the Royal Menagerie at the Tower of London. The exhibition opened in 2011 with sculptures constructed of galvanised wire include life-size lions, baboons, a polar bear and an elephant and helps to tell the story of the exotic animals that were kept at the Tower from the 1100s, providing entertainment and spectacle for visitors. The polar bear was a gift from the King of Norway to Henry III in 1251, whose collar and chain allowed it to fish for food in the Thames without escaping. In 1832 the remaining animals from the Menagerie were moved to London Zoo in Regents Park.

Wolfgang Buttress. Rise. Situated in Belfast, the sculpture has been designed so that it can be viewed from any angle, and welcomes views from all vistas and political and religious persuasions. The structural supports make reference to the marshlands which previously grew here. The sculpture is 37.5-metres high geodesic sphere, suspended within a larger 30-metre diameter sphere by discreet, pre-tensioned, galvanised wires. 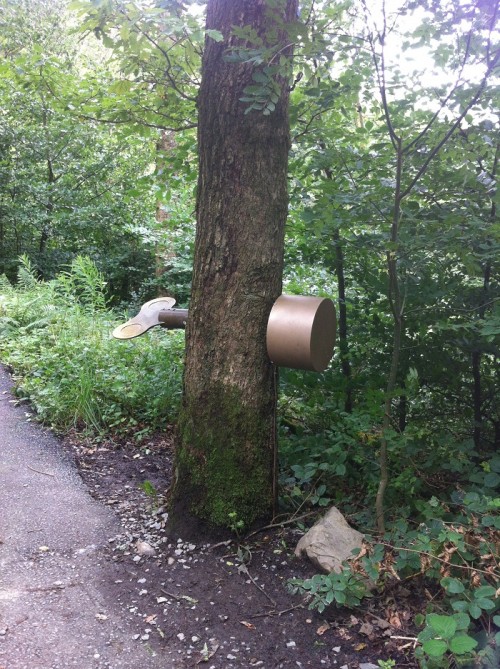 Greyworld. The Clockwork Forest. Greyworld are an arts group that make art for public spaces and create installations, sculptures and multiples. Their primary objective is to create public art that allows some form of creative expression in areas that usually exclude or ignore it. The Clockwork Forest was commissioned by the Forestry Commission and launched in October 2011 at Grizedale Forest in the English Lake District.

Unusual. Where the Wild Things Were. Made in 2010 by Unusual, an artists collective based in Manchester, with help from the children at Primrose Hill Primary School, Langworthy Road Primary School and Seedley Primary School. Sited in Salford, this sculpture celebrates the impact of the Manchester Ship Canal, a man-made waterway connecting Salford to the sea, and the rest of the world. The Canal was officially opened by Queen Victoria in 1894.

‘The giant blades of elephant grass suggest places beyond the Canal, where ships sailed to and from. Each steel base is engraved with drawings by local children, who imagined the landscape and wildlife of far-off lands. Their sense of wonder mirrors that of Salfordians who witnessed bananas, citrus fruit, cotton and tea arrive here from distant shores for the first time.’

The Marsh Award for Excellence in Public Sculpture was founded in 2005 and is the main award for public sculpture for the UK, Ireland, Channel Islands and Isle of Man. It promotes awareness and dialogue about public sculpture and celebrates new works that show originality, artistic quality and merit, and a concern for their setting. Awards are also made to high quality, appropriate and sensitive restorations of existing works. The cash prize is £1750

The PMSA (Public Monuments and Sculpture Association) is an organisation to record and promote sculpture, monuments and fountains in the public domain. Its chief objectives are to heighten awareness of Britain’s public sculpture, to preserve and protect our monumental heritage and to promote the commissioning of new sculpture. The PMSA is currently engaged in the National Recording Project, a comprehensive survey of British sculpture, and provides an international forum for scholarship with The Sculpture Journal. The Association also offers an advisory service and publishes a range of guides to encourage broad appreciation of sculpture such as The User’s Guide to Public Sculpture. The Save Our Sculpture (SOS) campaign highlights and monitor sculpture and monuments at risk and is leading action to tackle sculpture theft.

The Marsh Christian Trust was established in 1981 and provides grants to a wide variety of registered charities, and runs a portfolio of Awards with a number of internationally and nationally recognised organisations.