Damien Hirst’s Verity, is a 20-metre high bronze statue of a naked woman yielding a sword and staring out to sea in Ilfracombe, north Devon. Installed in October 2012 it is sited on the pier of the small harbour creating a Colossus for Ilfracombe. The sculpture is on a 20-year loan from the artist, who owns a restaurant in the coastal town and lives in the area. Standing at 20.25-metres high and weighing over 25-tonnes, Verity is described as a modern-day allegory for truth and justice. The figure’s stance is taken from Edgar Degas’s Little Dancer of Fourteen Years, c. 1881, referenced by Hirst in his earlier bronze, Virgin Mother, 2005. An anatomical cross-section of her head and body reveals the developing foetus in her stomach. The title is from Veritas, the Italian word for truth, whilst she holds the traditional symbols denoting Justice – a sword and scales – the scales are hidden and off balance behind her back whilst the sword is held confidently in her upstretched arm. Without the perfect equilibrium enacted by the scales, the sword becomes a dangerous instrument of power, rather than justice.

The design was initially made as a two feet tall clay maquette which was then scanned using a white-light scanner to make an electronic copy of the sculpture for casting.Verity was then made in over forty individual castings at Pangolin Editions foundry in Gloucestershire. The frame was fabricated in a single piece of stainless steel. The bronze parts were cast in pieces using sand moulds, which were then metalworked and reassembled around the steel frame. The sword and upper arm is a single piece of glass fibre reinforced polymer and the entire piece was tested in a windtunnel to ensure it could withstand the power of high winds and seas. 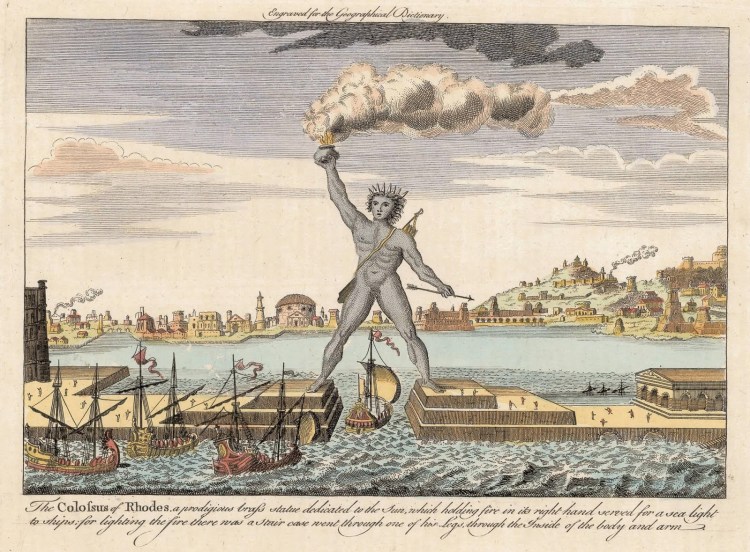 Lower image: A suggested view of The Colossus of Rhodes

Jeremy Hunt is Director of the AAJ Press (Art & Architecture Journal / Press) – a writer and consultant on art and public space
View all posts by jeh »
« PMSA: The Marsh Award for Excellence in Public Sculpture 2012
Exhibition: The Individual and the Organisation: Artist Placement Group 1966-79. Raven Row, London. 27 September – 16 December 2012 »