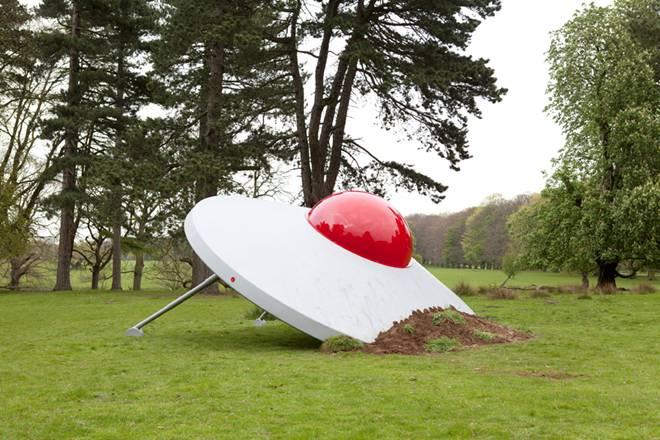 Per Ardua et artifices ad astra* might be the motto of Flights of Fancy, Tatton Park’s third biennial of contemporary art, where artists and writers were invited to respond to the themes of the impossible and aeronautical innovation to create works set in the context of the park, gardens and mansion of Tatton Park, a National Trust property in Cheshire. Flights of Fancy includes over twenty artists and writers working on major outdoor installations, site-specific films and a public engagement project, The Contact Programme.

“This third edition of the Biennial considers the human urge to fly, to accomplish the impossible in fragile times. Its artists are considering the impact of experimentation on delicate eco-systems, looking backward and forward for guidance, wisdom and/or humour. Their proposed results are experiments in time and space.” 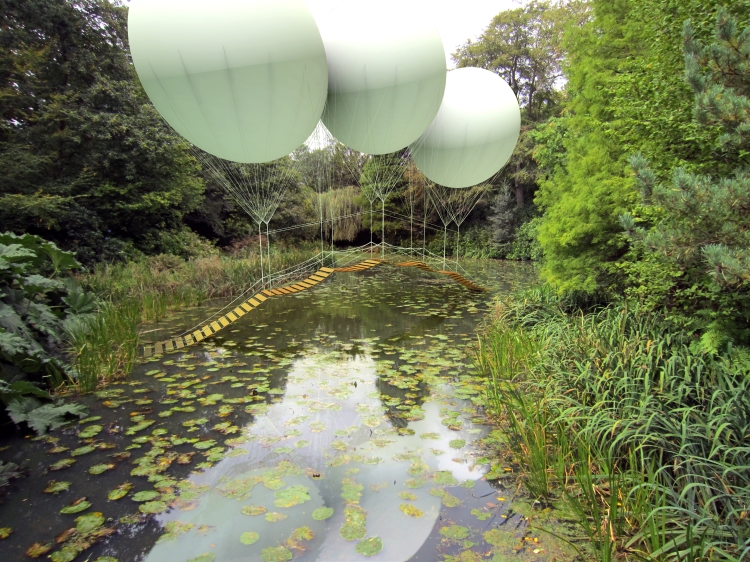 Biennial curators Danielle Arnaud and Jordan Kaplan asked artists to explore Tatton Park’s connections with early twentieth century flight. A previous owner, Maurice Egerton was a keen experimental aviator and friends with the Wright Brothers; and Tatton was used in World War II as a training drop zone for over 60,000 troops. Charbel Ackermann’s Dead Cat makes reference to the legacy of Maurice Egerton’s experiments with radio in his installation sited in the trees of the Arboretum; Tom Dale’s, The Mars Society investigates the relationships between military and social conquest with his ‘culture bomb’, using a 1950s British Thunderbird rocket as its starting point. Jem Finer’s Arriba! has created a space flight simulation in a camper van; Brass Art, the collaborative practice of Chara Lewis, Kristin Mojsiewicz and Anneké Pettican, have created Trine Messenger, an inflatable head adorned with wings, which appears to hover over the formal gardens; Olivier Grossetête’s bridge, Pont de Singe, will be held aloft by helium balloons; Dinu Li has created a 5-metre diameter crash-landed flying saucer, VEX, inspired in part by the diy-spaceships of 1950s B movies; Juneau Projects’ severed aeroplane fuselage, Gleaners of the Infocalypse, is home to the primitive fetishishism of cargo-cult devotees; David Cotterrell’s In Other worlds, I love You has made a visual depiction of data received from Jodrell Bank’s radio telescopes; and Simon Faithfull stars as a commuter traveling in a burning jet in a film he made in Manchester Airport’s ‘Big Rig’.

*Per Ardua et artifices ad astra (Through adversity and artists to the stars) – A revision of the RAF motto: Per Ardua ad Astra. 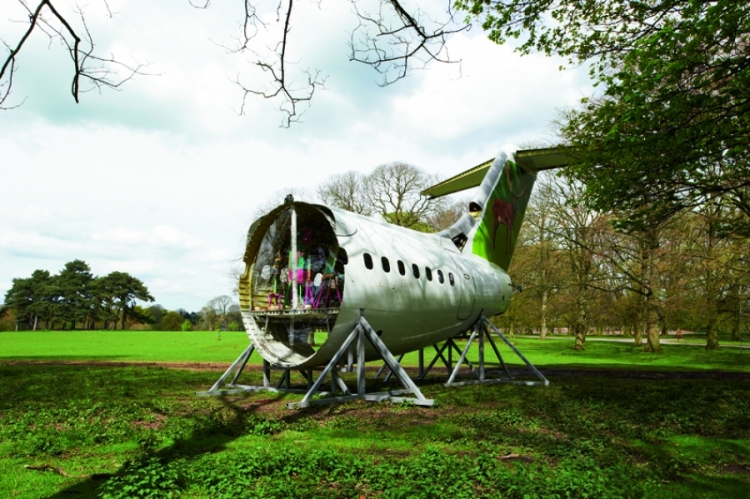 Jeremy Hunt is Director of the AAJ Press (Art & Architecture Journal / Press) – a writer and consultant on art and public space
View all posts by jeh »
« What’s That Thing? A Report on Public Art by Igor Toronyi-Lalic
Daniel Buren: Excentrique(s), travail in situ. Monumenta 2012. Grand Palais, Paris. 10 May – 21 June 2012 »