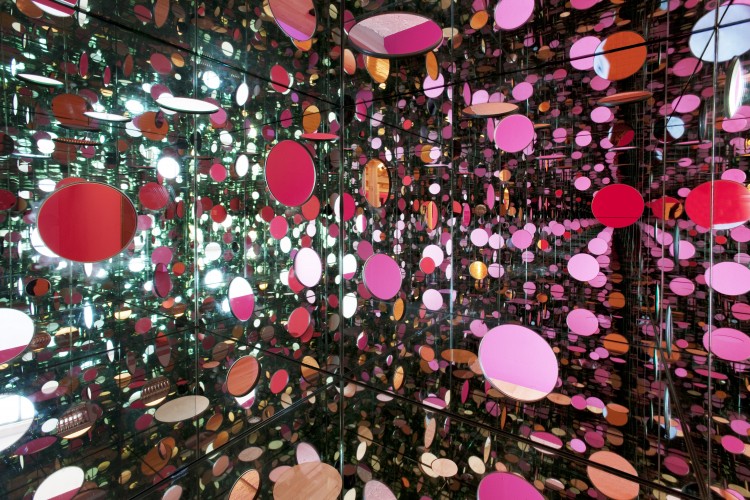 Yayoi Kusama retrospective, Tate Modern, London, 9 February – 5 June 2012: Well-known for her repeating dot patterns, Kusama’s art encompasses a variety of media, including painting, drawing, sculpture, film, performance and immersive installation. It ranges from works on paper featuring intense semi-abstract imagery, to soft sculpture known as Accumulations, to her Infinity Net paintings, made up of carefully repeated arcs of paint built up into large patterns. Since 1977 Kusama has lived voluntarily in a psychiatric institution, and much of her work has been marked with obsessiveness and a desire to escape from psychological trauma. In an attempt to share her experiences, she creates installations that immerse the viewer in her obsessively charged vision of endless dots and nets or infinitely mirrored space. The 83 year-old artist’s travelling global exhibition has been shown at Le Centre Pompidou, Paris, and El Museo Nacional Centro de Arte Reina Sofía, Madrid, and later this year at the Whitney Museum of American Art, New York (June – September 2012).

Yayoi Kusama, New Works, Victoria Miro Gallery, London, 10 February – 5 April 2012. In 2010 the Victoria Miro Gallery displayed Flowers That Bloom Tomorrow in the gallery’s canalside garden, and are currently exhibiting Kusama’s new paintings from a series developed in the last three years that are innovative yet classically Kusama. Completed in a single session, each is a flatly painted monochrome field that abounds with imagery including eyes, faces in profile and other more indeterminate forms, often in pulsating combinations of colours.

Flowers that Bloom at Midnight, Installation at the Jardin des Tuileries, Paris, 2011. Flowers have continued to populate Kusama’s imagination since the beginning of her career, and it is evident that the gay, yet monstrous, flower sculptures of today have their origins in the surrealistic specimens that pervade the landscapes of her early paintings. Kusama’s major retrospective at the Centre Pompidou in Paris coincided with a public exhibition in the Jardins des Tuileries animated by Flowers That Bloom at Midnight, a series of large-scale coloured sculptures, organized by the Musée du Louvre with the support of the Gagosian Gallery.

Yayoi Kusama – selected biography: Born in Matsumoto City, Japan in 1929, Kusama now lives and works in Tokyo. She represented Japan at the Venice Biennale in 1993 and has been the subject of many major international museum exhibitions.  In 2006, she was awarded the 18th annual Praemium Imperiale Award for painting.