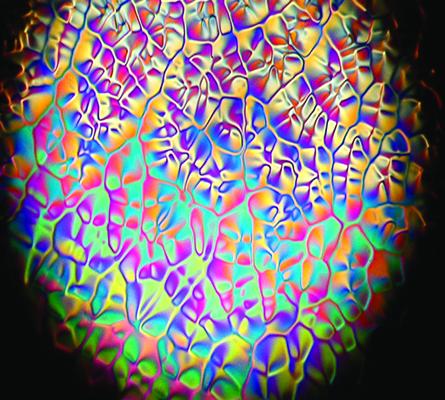 Kinetica Art Fair is a yearly event produced by Kinetica Museum. It brings together galleries, art organisations and curatorial groups from around the world who focus on universal concepts and evolutionary processes though the convergence of kinetic, electronic, robotic, sound, light, time-based and multi-disciplinary new media art, science and technology.

Karen Neill is a micrographer whose work blurs boundaries between art and science, as she maps the behavioural characteristics of the movement of fluid and in particular liquid crystal (found abundantly in the natural world in proteins, cell membranes and DNA).  She captures the full colour spectrum and the intrinsic qualities of its molecular structure, through film and photography using polarized light to reveal the molecular orientation, exploring the behavioural characteristics of the movement of fluid. After graduating from Byam Shaw School of Art London at Central St Martins London she was offered a residency at the Liquid Crystal Institute in Ohio where she analysed the liquid crystal as an Artist in the laboratory. Neill describes the micrographs and videos as ‘intimate moving paintings which gaze into a phenomenon; inviting the viewer to submerge within the realms of ethereal depths. As the liquid warms and cools the textures and spectrum writhe and flow enticing a sensory perception. Changes in the texture and the full colour spectrum of the liquid ‘take us to another world. It tests our senses and questions our perception of the hidden depths and influences of the movement of matter.’

“Green Ray 2 (Homage to Inaccuracy), looks as though its receiving signals out of the ether. In actual fact the work has become more about the surface of matter, as it literally is ‘describing’ visually the microscopic flaws between the brass and carbon surface of the slip rings (these transfer the electricity to the spinning part) and these manifest as interference pattern in the streaks of light.” Tom Wilkinson’s kinetic sculptures are investigations into the fabric of our world. Stemming from an early fascination with illusion and movement, his work is drawing inspiration from astronomy and metaphysics, reflecting the constant motions, cyclical patterns and kinetic energies that are universally present in our surroundings. Recognizing that all matter and physical objects are made of particles in motion with vast gaps of nothingness between their composite atoms, Wilkinson is interested in the movement of energy and the patterns that are created in the process. The spherical form is of particular interest as Wilkinson considers it to be the purest form in the physical world, the shape all matter, when fluid, gravitates towards. In 1998 Wilkinson began to experiment with spinning lights to produce illusory solid mass, where the traces of spun light produce volumic form. The spinning orb of Green Ray 2 explores the void at quantum level, with reference to the atom and its field of electrons. 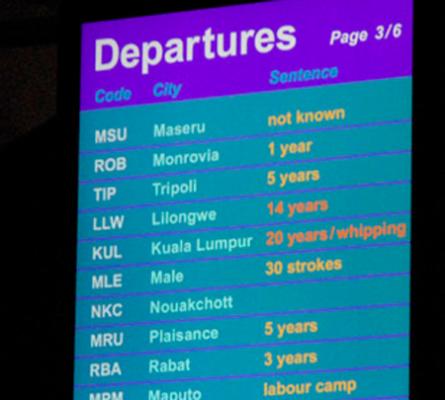 The Trope Troupe uses found objects, adapted technology, appropriated cultural artefacts and processed digital media; montage, collage and bricolage. Departures 4.01 is a screen-based ‘travel information system’ seems like a twisted admonition to ‘behave’ ourselves on holiday. It is however, in reality, a shocking reminder that around the world so many gay people’s sexuality is still criminalised. 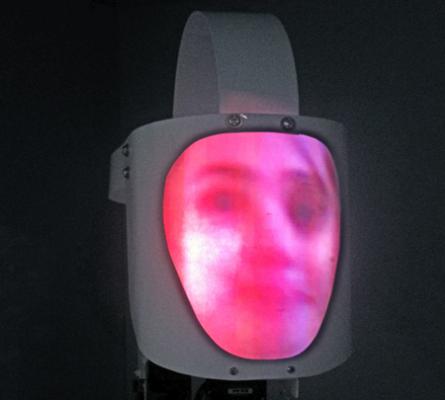 My Robot Companion by artists, Anna Dumitriu and Alex May, in collaboration with Professor Kerstin Dautenhahn and Dr Michael L Walters (Adaptive Systems Research Group, The University of Hertfordshire). Could this be the ultimate in personal robotics? It can take on the appearance of people around it to provide a potentially comforting sense of recognition and familiarity. The robot uses a Microsoft Kinect to take features from visitors’ faces and combines them with features from their friends and family’s faces based on their proximity to the robot. It looks most like the person that it sees most in order to promote bonding. Of course this can also lead to a feeling of discomfort known in robotics as “the uncanny valley” (Mori, 1970), where users feel a sense of repulsion, as robots become very humanlike but stop short of being fully human.

Dumitriu and May’s work focuses on raising public debate around the ethical issues in contemporary robotics and the piece was commissioned by The Science Gallery in Dublin as part of their 2011 “HUMAN+ the future of the species” exhibition. It also was exhibited at “Robotville” at the Science Museum in London and will tour in 2012. The head is shown on the “Charly” robot body, the latest humanoid robot built by the Adaptive Systems Research Group at The University of Hertfordshire as part of the LIREC project – (LIving with Robots and intEractive Companions) is a European funded (FP7) research project exploring how we can live with digital and interactive companions.

Events Programme:  Time, Transformation and Energy will focus on the shifting of time in the light of cosmological, astronomical, environmental and evolving universal events. It will feature artist presentations, live performances, talks and screenings.

Live Performances: The 3rd Musion Academy MAMAs Awards – a celebration of the world’s best holographic projection artwork combined with live performance. The winning entries will be shown throughout the 4 day programme alongside a series of kinetic sound performances.