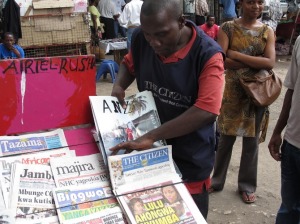 Like many of the major African cities the lively port of Dar Es Salaam is growing at an unprecedented rate, as a result it suffers from terrible traffic congestion, illegal construction, large scale informal settlements which in turn place huge strain on systems unable to cope with the growth – power supply, sewage and water networks. Unsightly high-rises are being thrown up, towers of air-conditioned glass that give no heed to sustainability despite government stipulations, palms are being greased and somebody is getting rich. This is a shame, as the state of Tanzania had such strong and healthy socialist beginnings under the leadership of the much revered Nyerere, it is one of the few African democracies to have avoided major internal conflict. The National Housing Association is still the largest landowner in the city by far, but no longer seems to be operating in the ‘national’ interest. Listening to these politicians speak, one feels almost giddy at the endless empty yet bombastic rhetoric, prefabricated crowd-pleasing slogans repeated to the point of meaninglessness, its strangely exhausting to listen to and has made many feel that confronting the administration feels like running through wet concrete, you don’t get very far before you get stuck.

But out of this complex matrix of corruption has emerged a strong clear voice in the form of a group of architecture students from Ardhi University in Dar Es Salaam, who felt that that there was real need for a publication that would act as a platform for critical reflection on the situation. In October of this year, in collaboration with Swiss architecture magazine Camenzind, they produced the first East African architecture magazine – in under a month.

When asked whether they thought the role of African architects is different to that of European architects the majority of them answered that as well as the practical and artistic role of an architect, they saw that a primary concern for them was to define their own role, to literally teach people outside of formal education (of which there are many) what an architect is and how architects can help them to use their city. In this sense they decided that the magazine should not be directed at other architects so much as at the layman; it was very important to them that the magazine span a series of roles as an educational platform, a source of information for decision-makers, a forum for the exchange of opinions and ideas, and a place where innovative solutions to recurring problems are proffered and discussed.

The first issue was printed in an edition of 5000 and given away free throughout the city. At one point the students wandered through a typical traffic jam distributing the magazine to people stuck in their cars. The first issue of Anza Magazine (‘start’ in Swahili) includes a history of the local architecture, a discussion of the city’s current position, poised as it is between competing pressure from industry and tourism. There is an interview with a local cab driver juxtaposed with papers by international academics that provide parallels with other African cities; namely the development catastrophe in Adis Ababba and the new strategies now in place, and the rise in Rwanda of what is being called ‘the landscape city’. As might be expected, the discussion of the relative merits of informal cities over formal ones raises its head in many of these articles. There are also interviews with local architectural stars, two die-hard East African modernists in their 90s; pioneers of the push to formalize architecture and the creators of several of Dar Es Salaam’s most distinctive landmarks. They were gracious enough to make themselves available to students who had never conducted interviews before; it is hard to imagine that happening in Europe, but in a city where there are 300 registered architects as opposed to 10,000 these things are more possible. In this sense there are both more and less possibilities for them in contrast to the West. 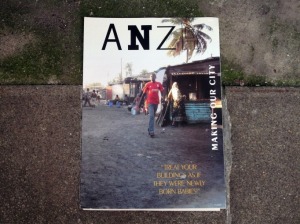 It might not have the finesse of most architectural publications, it is printed on old new-print machines, many of the students are just learning to use the design programs that are involved, the English is not always perfect, but the will is strong, the intentions are clear and you can almost smell the determination rising off the page; and as such is represents an extremely promising start, hopefully the start of something great.

Article by Leila Peacock: A visual artist with a masters in literature. Her work spans several mediums and disciplines including essays, performance, lectures, drawing, video and book making.