Exhibition: The Return at The House of the Nobleman, London

Posted by brookelynnmcg ⋅ October 26, 2011 ⋅ 1 Comment
Filed Under  house of the nobleman, victoria golemiovskaya

At The House of the Nobleman, run by Victoria Golemiovskaya at Cornwall Terrace, on the first floor of a palatial Georgian Nash terrace, overlooking the landscape of Regent’s park, a simple white sculpture presents itself, in a room concerned simply with form: the form of the circle, and all its attendant metaphoric itineraries.  Formed of the composite of multiple sculptural references, from Barbara Hepworth to the hull of a jet plane, young British artist Nick Hornby’s sleek and playful design espouses not the whole, in its notion of any complete, but the hole, the passage way, the journey.  This work, poised beside the apocalyptic glitz of Stefano Curto’s wall based work Evolution Involution (2011) made entirely of Swarovski crystal, occurs in the context of The Return, an exhibition staged by the young arts organization The House of the Nobleman.

Yet if there is a nobleman, he has left the building.  The house remains, and in fact reflects an ongoing collaboration between the young curator and developer Oakmayne Bespoke.  In the presentation of The Return, five stories of roving ideology and aesthetic pastiche perform the seemingly absent centre of a madman who has sometime ago fled the scene, leaving behind a tempting and sumptuous display works from Monet to Zaha Hadid, Calder to Carlo Dolci, Rubens to Anish Kapoor.

This is however, not the scene of a disaster, nor of an aftermath, nor the space of the ruin. The exhibition is at times self-consciously imperial, such as in the aggressive display of animal prints and Hiroshi Sugimoto’s Portraits from 1990 of figures from contemporary culture filling the space of a room beside two impressive works by Rubens and a large wall sized gouache and charcoal on canvas by Wolfe Lenkiewicz.  In the latter work, entitled The Smokers (2009), the artist portrays two idle aristocrats, whose armoured gentility, with faces framed by the circuitous mark of powdered wigs–calming regarding their onlookers whilst clad in swords, epées, and rifles–sits uncomfortably against cubist stylistics and a background of worn dots reminiscent of Damien Hirst. Lenkiewicz’s gesture is the same as that of the curator; to remark that imperial aggression does not fade in the setting of post or even alter-modern, but persists, with or without a narrative, grand or otherwise. 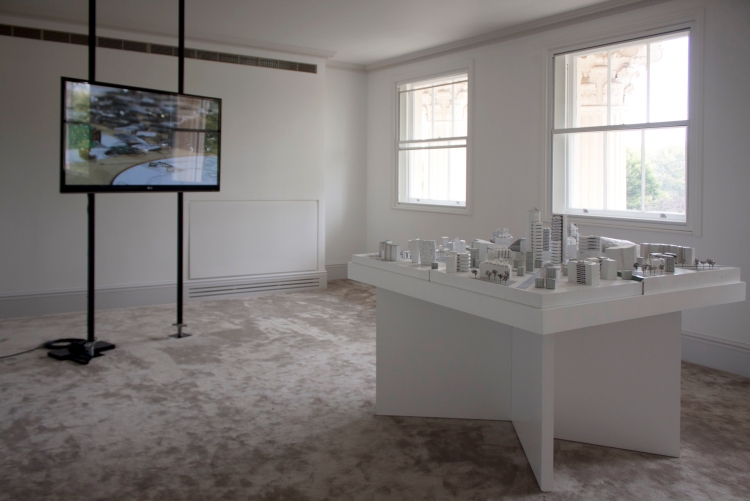 For Golemiovskaya, however, and the exhibition as a whole, it is not about imperialism per se, but a return or persistence of the sacral within contemporary art and culture; that the spiritual has been and continues to serve as an alibi for power and domination is only a logical conclusion of her careful inquiry which just as easily concerns questions of spectacle, consumption, spirituality, and the very idea of the human.  “There are questions which are not being asked.  There are questions which have not been answered,” states Victoria. Her concern, of course, is not with providing answers, but producing what she calls a ‘journey’ for her viewer, in through the imposing foyer, greeted by the large ‘purifying’ modular sculptural works by Hadid, through to the high-gloss temptation of Mark Quinn’s strikingly saturated print of an accosting daffodil surrounded in succulent fruit (suggesting that this and any sacred journey begins with a fall from Eden, a desire to possess), and then, up staircase after staircase, leading above—and below—in a labyrinth of aesthetic oppositions and alliances, charting a history of art which is not as such historical, but at the end of history, has found that the last man is gone.  He has left the building. The house remains. 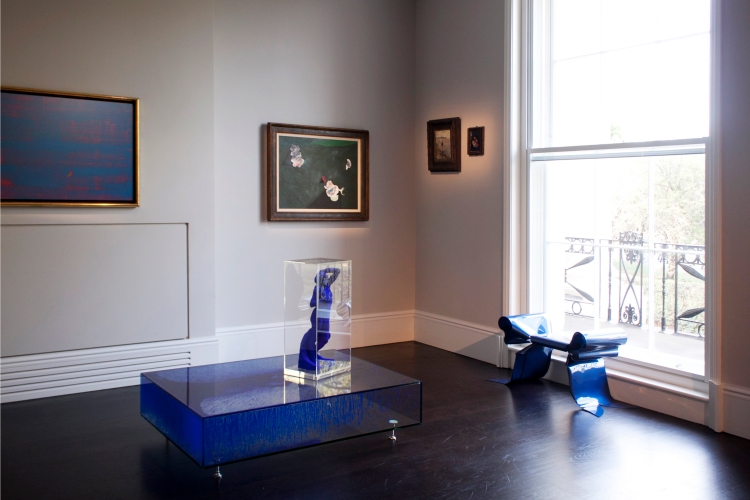