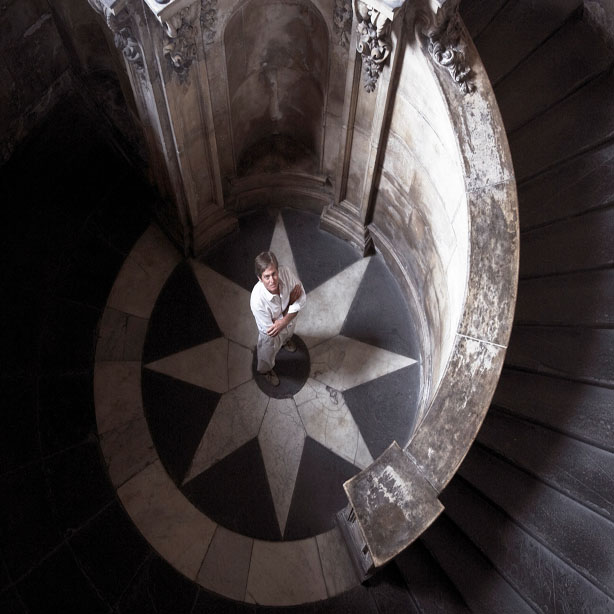 St Paul’s Cathedral was topped-out exactly 300 years ago and as part of the London Design Festival 2011 John Pawson is creating an installation, Perspectives, at the base of the Geometric Staircase, over 15 metres high and with 88 steps, in the South West Tower. A metal and Swarovski crystal half-hemisphere allows visitors a greater view of the cathedral than the natural eye could see. The intention is to turn this spatial volume into its own viewing device. The installation will be a concave Swarovski crystal meniscus – the largest commissionable lens – which will be located at the bottom of the stairwell. This lens will sit on a much larger reflective surface – the upper plane of a specially fabricated metal hemisphere (1200mm in diameter and 675mm in height). A 2m wide spherical convex mirror will be suspended in the tower’s cupola, directly over the hemisphere. Acting in concert, these optical devices will result in a composite image of the view up through the tower and an elevated downward perspective appearing to visitors who will be gathered round the hemisphere.

Perspectives complements Sir Christophers Wren’s intention that each of his buildings should include a scientific element. The precedent exists for the idea of using the architecture as an optical instrument, since Sir Christopher Wren used a similar chamber in The Monument as an observatory.

“St Paul’s is one of the most recognisable buildings in the country. Inevitably it’s the grand architectural moves which everyone knows – the west elevation, the nave and the dome. As part of this year’s London Design Festival, with the generous support of Swarovski, we have been given the chance to turn the focus on a less familiar element, the Geometric Staircase, which is a detail, but also a complete moment in its own right. The Cathedral is an immensely complex work of architecture and the temptation when you visit is to try to take in everything. This is about offering a spatial experience based around a single, sharply honed perspective. The form this experience takes will be shaped by Wren’s own interest in creating scientific instruments out of buildings”. John Pawson

St Paul’s Cathedral will also provide the backdrop for the fifth presentation of the London Design Medal on 19 September, awarded for having made a significant contribution to design and London. A design industry panel, including Director of the V&A, Sir Mark Jones, Cultural Advisor to the Mayor, Munira Mirza and Editor of Wallpaper* Magazine, Tony Chambers, will determine who will receive the medal in 2011. Previous winners include Sir Paul Smith, Zaha Hadid, Marc Newson and Thomas Heatherwick.