James Capper, Ripper Teeth in Action, is part of Modern Art Oxford’s Art in Rose Hill  commissions programme. Inspired by the aesthetics and actions of large-scale construction machinery, Capper employs a set of ‘ripper teeth’ of his own design to work on sections of land around Rose Hill, Oxford. In a series of live performances throughout August the artist will attach these custom-built fittings to an excavator vehicle in order to explore their capacity for mark-making. Capper’s activities respond to the regeneration of the neighbourhood, paralleling some of the earthmoving techniques already taking place in the area. Both machine aesthetic and mechanical processes are central to Capper’s work, which takes as a source of inspiration the numerous experimental and prototype earthmoving machines developed by Robert Gilmour LeTourneau in the 1960s. 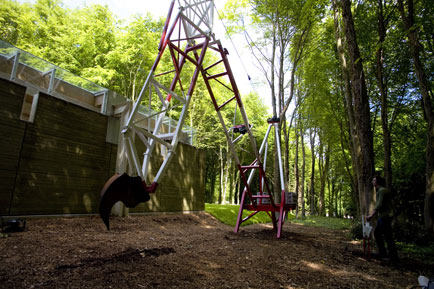 The sculpture, Tread Toe (pictured), is a large-scale moving sculpture by James Capper on display throughout the commission. A self-powered machine with a steel chassis and a central telescopic, hydraulic foot enabling it to move forward with a slow stepping motion.

The commission was supported by an exhibition at Modern Art Oxford’s Project Space of drawings, sketches and concepts for sculptures by James Capper. The works on paper illustrate the ideas and design processes that underpin the development of the machines he constructs. These drawings include initial concept sketches for existing works and chart the process of refinement of concept through exploration in drawing towards a technical blueprint for an achievable sculpture.

Thursday 22 September 2011. 7pm. James Capper in conversation with critic  Richard Cork, discussing Ripper Teeth in Action, including the screening of a new documentary film recording the project in Rose Hill.

Art in Rose Hill is a programme of visual arts activities organised by Modern Art Oxford taking place in Rose Hill, Oxford and at the Gallery, supported by a major grant from The Paul Hamlyn Foundation.