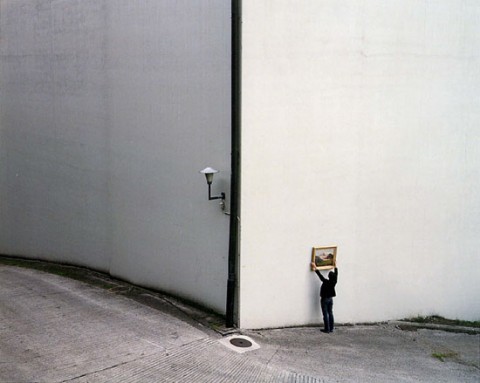 As part of the ‘Swiss-UK Dialogue’ initiative, and the ‘Spaces of Encounters’ events programme, six emerging and established Swiss artists were invited to explore the concept of Re-generation as it occurs in a global and mostly urban environment.  The artists have responded with photographs examining the cultural, environmental and social contexts of the topic.

The large-scale installation is presented on numerous billboards around the London Bridge area. By using billboards as canvases, the artists engage directly with the public, and the exhibit is accessible to anyone passing by. The manner of presentation therefore also explores how public spaces can be reconfigured and reassessed. The billboards feature photographs, with no text and a link to the http://www.spacesofencounters.com website.

Olaf Breuning’s work is simultaneously humorous and serious, using comedy to hook the viewer and then engaging and encouraging deeper reflection on man’s relationship with the environment. In ‘Complaining Forest,’ he visualises the screams and shouts of a very peaceful-looking landscape, juxtaposing the words against the backdrop of trees.  In ‘Clouds,’ he superimposes superficial clouds onto a gray sky on a rainy day.

Georg Gatsas’s portraits focus on the contemporary music scene in South London. The portraits show the people at the forefront of the scene, like Ikonika and Scratcha DVA, as well as clubbers, invoking a sense of community for a new generation that is constantly in flux.

Loan Nguyen’s photographs reflect on the nature of our surroundings and how they are altered by the artist’s presence and her actions. The result is a very human footprint being left on otherwise inconspicuous spaces – at the heart of her images is a discourse about identity and human voice.

Matthieu Gafsou presents man-made monuments next to wastelands, using shocking pink to highlight the artificial nature of these spaces. The photos show just their surface and texture, while the use of colour leads the viewer to question the true reality of these landscapes and why/if they indeed exist.  Highlighting human interference with the environment, the images ultimately ask if in trying to make the world better, we instead make it worse.

Tobias Madörin’s images reflect on development, the constructed environment and sustainability.  They show how hundreds of people climbing a mountain every day can turn it into a ‘mountain motorway’.  In his landscapes, people leave unmistakable traces of conquest: a building is carved into the side of a mountain; a stark pier juts out over a waterfall.

Gian Paolo Minelli depicts an abandoned and decaying development on the outskirts of Paris.  Established in the 1980s as an experiment in social housing, today only ruins remain.  His pictures engage with the beauty of the buildings’ geometrical shapes, their angles softened by muted colours, still echoing the original hope and enthusiasm which infused the project.