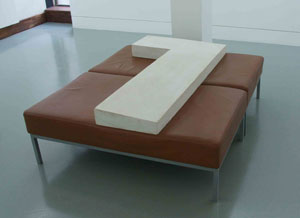 Elizabeth Wright’s work often generates humour at tripping up the viewer by rescaling or replacing parts of the everyday world. Her re-sized Mini often crops up in ‘Art in the Public Realm’ presentations, creating an affectionate memorial for a losing English car industry being overtaken by the German and Japanese industry giants. Her current exhibition Sextodecimo taps into the same contemporary nostalgia as the enlarged Mini. Basil Spence’s Swiss Cottage Library is a touchstone of an age that never quite happened. Nearby Hampstead was the home to many of the mandarins who plotted the post war settlement, including Herbert Morrison who was prime mover behind the Festival of Britain being commemorated with bunting and beach parties this summer at the South Bank Centre. One of Morrison’s protégés was Beatrice Serota who chose to become Baroness of Hampstead when she was made a Labour Peer. As originally planned in the early 1960s the Library was one part of Spence’s larger master plan for a civic centre including housing that was a compendium of model projects by the architect and his circle from the preceding twenty years. Politics, budget cuts and a ‘revisioning’ intervened and now the Library and one F. E. McWilliam sculpture are all that is left.

One of the building’s main design features is the concrete ‘fins’ that recall the pages of an open book. (The definition of Sextodecimo is the page size of a book composed of printer’s sheets folded into 16 leaves or 32 pages.) Spence believed this architectural element so clearly stated the library function of the building it made any other signage redundant, it was the library’s own physical and visual index. Wright has cast parts of these forms and they are displayed around the building. There is an analogy of the building itself being folded back into a document, placed on the return trolley to be stacked back on the shelves or discarded on a bench. Spence’s dedication to his vision included designing every feature of the building down to the original tables some of which are used in the display. In the gallery a model of the unaltered Spence building is on a plinth amongst Wright’s concrete blocks which shows off even more the pristine quality of their forms and the care put into their making and display. As they appear at seeming chance around the building the concrete ‘L’ shapes also look like they have been left from an outsized alphabet set escaped from the children’s library in the building.

The work is playful but with a serious message – the physical books and staff that make up the library are being rationalized and the building has a perpetual consultation hovering over it. In 1965 the building took over the area’s library function from the site that now houses Camden Arts Centre and possibly in the near future it to will be ‘redeployed’.