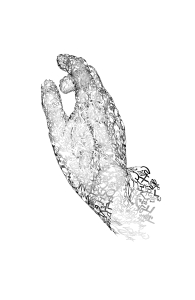 Spanish born Jaume Plensa has been commissioned by Chichester Cathedral to create a new sculpture, entitled Together to hang in the space above the bridge, in front of the run-up to the altar. The space was previously dominated by a crucifix and angels, which were taken down in the 1960s. After an initial idea to replace the original crucifix was rejected, it was decided to commission a new work.

Chichester Cathedral, in West Sussex in the South of England, has a long history of commissioning modern art, thanks to the work of Walter Hussey, Dean of Chichester from 1955 to 1977, and described by Kenneth Clark as the last great arts patron within the Church of England. One of his notable commissions is a stained glass window by Marc Chagall. In 2009, to mark the centenary of Hussey’s birth, Chichester Cathedral developed the Hussey Commission, to create a new piece of art for the Cathedral. A longlist of thirty international artists was drawn up, with five artists, including Dorothy Cross, Antony Gormley, Ana Maria Pacheco and Mark Wallinger chosen to submit designs. None of the original designs were chosen, but Jaume Plensa was one of the artists invited to resubmit. He agreed to substantially revise his initial idea and so developed Together, the hand of Christ raised in blessing, made from stainless steel lettering.

Plensa’s internationally renowned projects include the Crown Fountain in Chicago, a fountain with digital images of local citizens, and Dream, a giant white stone head of a girl situated on the site of a former coal mine in St Helens, Lancashire. Plensa’s work celebrates ordinary people and communities, declaring that he is inspired by the poet, who works for no money, only the gratitude of his audience.

Part of the brief  was for the sculpture to be accessible to all. The title Together is about creating a community and inviting in outsiders. The fingers point upwards to encourage the viewer to look up, potentially to the heavens, but also to better admire the beautiful architecture of Chichester Cathedral.

The sculpture is a contemporary reinterpretation of the crucifixion. The hand will be made up of letters from eight different alphabets, which represent cultural diversity. Plensa believes the sculpture will be a metaphor for humanity’s skill to illuminate life. He thinks that dialogues create energy and the individual letters within language (or the hand sculpture) must be linked together to create meaning, much like cells link to create a human body. The blessing hand is an internationally recognised symbol.

Discussions between Plensa and the Cathedral authorities concluded that the sign of the stigmata should be present in the sculpture. This is partly to reduce ambiguity as there is a statue of St Richard, his hand raised in blessing, situated outside the cathedral. The medieval representation of the stigmata will emphasise that the sculpture is the hand of Christ and will be depicted simply by leaving a gap in the middle of the hand on both sides.

The design for the hand itself comes from Plensa’s own hand, which has been scaled up and elongated. In order to make the sculpture, Plensa first wraps the metal letters around a wooden carved hand with the letters chosen at random to best fit the shape. The finished piece will be 3.5m high and weigh 65kg made in 4mm thick brushed stainless steel. The commission is being managed by Modus Operandi. The work is subject to consent from the CFCE and will be funded by private donors.

There is currently an exhibition at the Cathedral explaining the history of the Hussey Commision, entry to the building and exhibition is free. www.chichestercathedral.org.uk

Submitted by Victoria Prior

A self-confessed telly addict, Vicky is known by her family as Inspector Mouse due to her love of crime dramas and like Miss Marple, she often knits and enjoys a good book.
View all posts by vickyprior »
« Tate – Support for Ai Weiwei
brook & black – Plot 16: The Fermenting Room, Oxford »