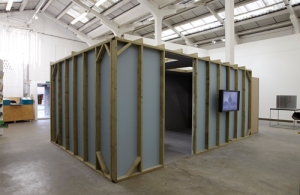 The current show at Eastside Projects is exhibiting major video and architectural models from one of the great post-minimalist artists Dan Graham. Representing some of his most memorable work of the last thirty years – including the classic Homes for America photographic series (1966-1989) and the video ‘Performer/Audience/Mirror’ (1977) – this unique framing of his artistic enterprise is more than just another art show. Graham’s work – seemingly chaotic in its endless multi-media variety – is a highly stimulating environment made of up a series of explorations on the nature of social space.

Eastside Projects is a new art space in the area of Birmingham’s inner city Digbeth known as ‘Eastside’. The space is not another fashionable location for a new ‘creative class’, but is a project space that engages artists in a broader set of questions on the nature of the urban landscape and its development. One immediate context of these projects is the emergence of Birmingham as a major player in the European contemporary art scene. However, where the contemporary art scene is fixated on art objects and their markets, in Birmingham we find a refreshing emphasis on the social and the urban. Another immediate context of these projects is the city of Birmingham’s pressing urban condition. Current central Government-funded models of urban development are somewhat unstable and contradictory, despite the city council clinging to its pre-recession high cost official urban strategy, called the ‘Big City Plan’. For in the light of recent massive economic cutbacks, most urban actors are admitting that the era of large scale corporate ‘urban regeneration’ is over. And if urban regeneration is over, then ‘culture-led’ urban regeneration is over. We therefore require an alternative intellectual framework in which to (re)conceive the role of art and culture as a dynamo of urban transformation. Eastside Projects is just that impetus. 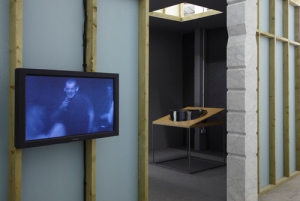 Since the mid-1960s, Graham’s media included the written word, photography, performance, drawing, modeling, and video. His work has been intrinsic to the recent history of contemporary art, particularly emerging from the highly-influential post-minimalist period in New York from 1968 onwards. However, through the 1970s as that generation of artists were settling into their ‘signature styles’ and signing up to large gallery deals, Graham continued travelling on the ‘edge’ of genres (as he would say), and on the cutting edge of contemporary art’s interventions into the dynamics of everyday social culture. Graham avoided the mainstream and increasingly commercialized realms of conceptual art and stage-managed performance, preferring to embed himself in emerging pop culture and new video art, writing reviews on new Punk bands and essays on the way video was transforming our cognitive understanding of urban space. Despite the fact that his writings have become seminal moments in cultural theory, today most curators and critics find his work too perplexing to handle.

Graham regards his art as ‘hybrid’, and when one considers his origins as one who aspired to, and became, an accomplished writer and critic, one gains a more suitable frame through which to approach his work. The work, like most art of its era, does not present visual solutions to conceptual problems, or artistic ‘expression’, or representations of some artistic idea. They involve the viewer in a thought process. But unlike ‘process art’ or conceptual art, which also involve the viewer in a cognitive process, Graham’s work is explicit and analytical in the way it engages the thinking subject, encouraging that subject towards a ‘mimesis’ of its intellectual approach to the visual world. There is no arty-vagueness to this work. It encourages a penetrating mindset of inquiry in the viewer – viewers can and must think for themselves. This exhibition at Eastside is an ideal introduction to Graham, as well as a means to address the very current conditions of urban life. 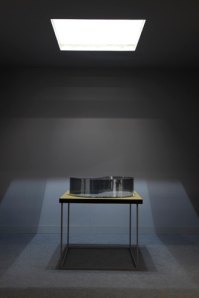 Graham’s architectural models confront the functionalism of modernism as well as the eclectic historicism of postmodernism’s proclivity to stylistic syncretism. This confrontation is a disavowal of the art critical dichotomies of the last forty years, and introduces the viewer to the more pressing, unpredictable and uncontrollable forces that structure social space. How do we intellectually engage with such forces? Why are the environments we live indifferent to our needs? This is not a game of constructing explanations and Graham is uninterested in established academic models of analysis. Urban life does not admit such; they are ineffectual when confronting it. Rather, we are to develop a more assertive (if less egotistic) means to explore the concealed conditions within which we live – and exploration means being embedded in the object of investigation. Thus in Graham’s work it’s difficult to find the line where what is normally called ‘subject matter’ is differentiated from its modes of representation, or the artists own ‘take’ on it.

Both the models and the videos deal with social or urban space, and architectural environments. In one sense the models are complimentary to the videos inasmuch as the volume and physical space of the models are echoed in the virtual interior space of the screened video. They are also distinct and interactive in the sense that the video is reflected in, and refracted by, some of the models; but also that the video demonstrates the performativity of what can be mistakenly assumed to be ideal conceptual structures latent in the models. At the entrance to the exhibition we are confronted with Graham’s ‘Death by Chocolate’ from the mid-1980s. Saturated in a colour palette now lost to HD digital recording, the video captures a concealed dimension of consumer life – in this case framed by Canada’s West Edmonton shopping mall. The camerawork is subtle, without the usual professional technique, yet locates the interface between the social behaviour of shopping and architectural structures – noting also the subtle means by which the architectural innovations of both radical modernism and postmodernism has been appropriated effortlessly by consumer capitalism.

Whatever observations there are on the spaces of consumer capitalism, Graham is never didactic or programmatic in his observations. There is no pre-packaged neo-Marxist critique latent in the videos – Graham was always both too rebellious and too analytical not to acknowledge the eruptions of unprecedented individual liberty that the contradictions of capital afforded. Punk Rock, and other musical expressions, fascinated Graham from the late 1970s onwards – inspiring one of his now classic films Rock My Religion of 1982-4. Graham refused to become part of the new conceptual art movement (now establishment) because of its pre-packaged ‘theory’. In Graham’s work, theory is a project for the viewer as they make their way through his work, through the process of immersion in the object of analysis (i.e. that is also the object of experience). Theory is a provisional cognitive tool – and is always deployed critically, not allowing it to become a prohibitive force of moralism against untheorizable experience of anarchic pop culture or urban life.

Graham’s videos are visually engrossing because they are conceptually fascinating – each art work in this exhibition will demand a substantial portion of your time. The exhibition therefore will not make much commercial sense to the art dealer or cultural consumer. Art for Graham is a form of work, intellectual labour; it doesn’t function well as a cultural commodity.

The models Graham has called ‘perceptual machines’, and are architectural pavilions. They demonstrate that the most elemental architectural logic derives not from a purely conceptual mode of thought – from, in other words, a purely rational understanding of space. The logic of architecture emerges from a sense of social movement, of intersubjective interaction, of unexpected bodily negotiation of the confines in which it finds itself. And it’s not clear how this happens – architecture is a mode of cultural memory as much as an approach to urban problems of accommodation and facility.

The audible video in the exhibition is mostly open space-facing; the silent models housed in two enclosed units. Graham’s classic Homes for America photographic series are tangentially opposite his ‘Performer/Audience/Mirror’ from 1977. The former reveal his dispassionate documentation of the social housing projects of New Jersey, his home state. The latter reveals Graham as a younger man, before an audience, able to engage in a characteristic impromptu phenomenological analysis of himself as intersubjective interlocutor. Perhaps as a nod to the origins of conceptual art, the one (of only two) large display walls feature large black and white photocopies of Graham’s (colour) article on American corporate interiors for Building Design in October 1988. This was part of a number of influential essays, like ‘Garden as Theatre as Museum’ of 1989, influential to architecture criticism. In this piece Graham demonstrates his intellectual range – his analytical understanding of architectural construction as much as of its social performativity.

Other videos feature further pavilions and more recent installations (from 1974-2009). In them Graham moves from a cultural studies of architectural form to a more erudite phenomenology of space. One of the two enclosures feature a beautiful twinning – a moment of classic post-Bauhaus architectural form – of Swimming Pool of 1997 and Model for Ying Yang (one of his few public commissions, a pavilion for MIT, installed 2004).

The great thing about this exhibition is that regardless of the age of the art works, they seem to address contemporary conditions of our urban life. From which issues central to the future of Eastside will emerge.
Graham, D., Video—Architecture—Television: Writings on Video and Video Works 1970-78, ed. B. H. D. Buchloh, Halifax: The Press of the Nova Scotia College of Art and Design, 1979.

I research the politics of contemporary culture, the role of culture in the public sphere, and cultural economy discourse in International Development. I also work as an art critic, editor and public speaker.
View all posts by Jonathan Vickery »
« OPEN CALL ‘FORTHCOMING MYRDLE COURT PRESS BOOK ABOUT THE OLYMPICS’
Narrative in Practice 2011 Symposium – London »