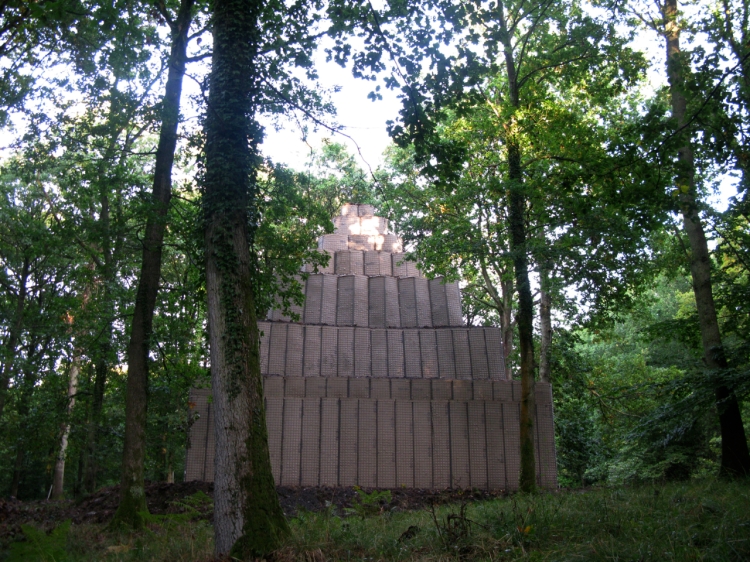 “My name is Ozymandias, king of kings: Look on my works, ye Mighty, and despair!” Nothing beside remains. Round the decay of that colossal wreck, boundless and bare. The lone and level sands stretch far away. Ozymandias, Percy Bysshe Shelley

Two distinct ecologies give rise to David Cotterrell’s new sculpture Hill33, created for The Forest of Dean Sculpture Trail. The artist’s memories of Mayan temples hidden in rainforests of Central America inform the structure’s stepped pyramid-like arrangement. Whilst Cotterrell’s time spent as a commissioned war artist in the semi-arid Helmand Province of Afghanistan introduced the artist to HESCO ‘Concertainers’, the ballast filled containers employed in war zones in lieu of sandbags to quickly erect fortifications; and from which this new work is constructed.

The American vernacular landscape writer John Brinckerhoff Jackson noted that: “sometimes the desecration of a landscape is so ancient that we accept it as a part of nature”. Echoing this sentiment Cotterrell describes his initial encounter with the Forest of Dean, which was to become the sculpture’s setting: “My early visits to the Forest offered an unexpected series of contradictory perspectives. The glades of bluebells, dappled light and fabulous weather offered an idyllic vision of natural beauty. However, it’s also a landscape shaped by historic industries and human intervention. Reclaimed through time, the residue of free-mining, charcoal burning and commercial forestry is discretely camouflaged beneath the prolific growth of plant life.”

The intended appearance of the sculpture will develop slowly over time as the surrounding flora of the forest colonises the earth held within the pyramid. The artist makes reference to Shelley’s 19th Century sonnet in which a ruined statue from antiquity is discovered in the desert, a metaphor for the inevitable decline of empires. But the structure denies obvious monumentality of Shelley’s Ozymandias; it is destined to return to its source, obscured by the plant life that takes root in its soil.

The 11-metre tall sculpture was built over a period of two weeks with assistance from the 100 Field Squadron of The Royal Monmouthshire Royal Engineers. Each gabion-like cell is c. 2-metres tall. In total, the structure is filled with c. 1,300 tonnes of landfill reclaimed from Eastern United Coal Mine in the U.S.

Hill33 was commissioned for the Forest of Dean Sculpture Trail with funding from Gloucestershire Environmental Trust, Forest of Dean District Council, and sponsorship from HESCO Bastion. The sculpture project began in 1986 and features 18 works along a 4-mile path, including work by Cornelia Parker and David Nash.

David Cotterell is Professor of Fine Art at Sheffield Hallam University. In 2007 he was commissioned as a war artist by The Ministry of Defence and The Wellcome Trust. Cotterrell is an installation artist working across a variety of media and has acted as a consultant to urban regeneration, masterplanning, and public art policy since 2002

I am an artist, writer, and architectural historian. My interests and practice lay at the intersections of art, literature, architecture, and landscape. In the field of architecture I am particularly engaged in questions of conservation and re-use. I currently co-ordinate the Postgraduate Diploma programme in the Conservation of Historic Buildings at the Architectural Association, London.
View all posts by Danielle Hewitt »
« Association Inscrire / Atelier Azulejaria: Estação Luz do Metrô, São Paulo, Brazil
Day of the Dead Festival: Brick Box, London »