Mason’s Music for Oslo City Hall did not limit itself to this main hall alone as the musicians and singers moved around, inside and on top of the building, exploring subsidiary conference rooms, ventilation canals, libraries, reception rooms and the debating chamber of the City Council.

The work was specially composed for the opening of the Ultima 2010 Oslo Contemporary Music Festival for the Oslo Rådhus (Oslo City Hall) with the Oslo Sinfonietta, Ensemble Allegria, and the Oslo Cathedral Choir in two performances on 8 September at 7.00pm and 20.30pm. The grand main hall in the Oslo City Hall is used on 10th December each year for the presentation of the Nobel Peace Prize and Mason’s libretto reflects all aspects of the use of this building. Not only the prizewinners, but also the unsung heroes who built it and who work in it.

Benedict Mason introduced his concept for the audience’s involvement: “You are invited to experience this piece in your own personal way. However I conceived a general outline, which I would like to describe, where the building is gradually opened up as follows, but is not intended as any formal ‘tour’ of the building. The piece starts with a prelude outside the building. The south doors then open onto the opening section in the cloakroom, lowest level. After that you can follow violins and flutes to the middle, Nobel level. When the performers come onto the main staircase, you can choose to go up to the balconies and watch the activity below if you wish. The upper rooms on the second floor are then explored starting on the east and south banqueting rooms, before moving round to the south-west; west (go through the opening and closing doors if you can!), and finally north spaces. At the end, musicians are dispersed all over, and you should make your way outside to experience the farewell.”

Brad Lubman, the conductor, described the work: “It combines aspects of music, theatre, dance and performance art.  All the elements are very carefully worked out and controlled, so this is not the same thing as a 1960’s ‘happening’ or an experimental theatre piece. It is indeed a work of the highest, most detailed, level of craftsmanship and artistic integrity, a work that is highly engaging and which touches the audience in many compelling ways.”

Mason’s work for Oslo City Hall is part of his series Music for European Concert Halls, in which the pieces are made with the intent of taking advantage of the tone and the various architectural characteristics of the different concert halls. Pieces have been created for the Berliner Philharmonie, Espace de Projection at the IRCAM/Pompidou Centre in Paris, Seiji Ozawa Hall in Tanglewood, The Museum of Modern Art in Stockholm and Kultur und Kongresszentrum in Luzern. The pieces can be performed anywhere and are not finally site specific, though they are set for the location of their first performance. 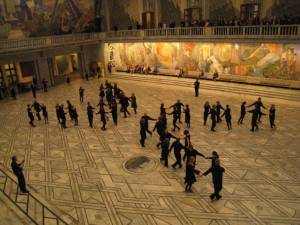 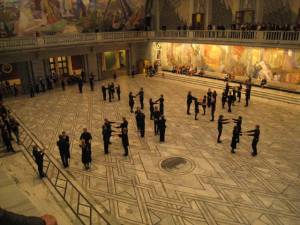 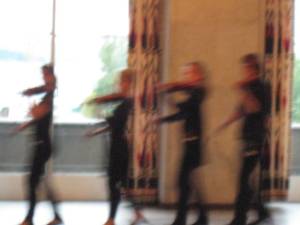 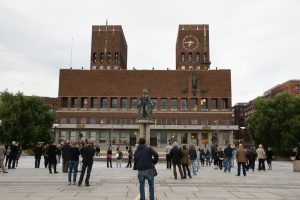 Jeremy Hunt is Director of the AAJ Press (Art & Architecture Journal / Press) – a writer and consultant on art and public space
View all posts by jeh »
« Musarc: exploring the relationship between architecture and sound
Jochen Gerz: 2-3 Streets. RUHR 2010 »